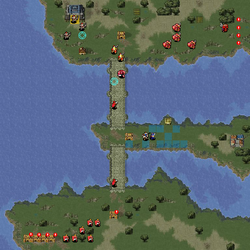 Chapter script
[view]
“Soon after reclaiming the Fane of Raman, Marth’s army fears pursuit from the Archanian army and escapes towards Chiasmir Bridge. However, a new enemy attacks the Altean army upon reaching the central islet. “The Archanian army is coming from the north; we’ll be surrounded like this.” The situation is desperate! Can Marth and his friends overcome the many perils?”
—Opening Narration, New Mystery
“Soon after reclaiming Raman Temple, Marth was pursued by Akaneia's army and headed towards Cashmere Bridge to escape. However, after easily reaching the central islet, the Aritian army was attacked by a new foe. "Akaneia's army is approaching from the north. If this continues we'll become surrounded." There's no way to go! Can Marth and the others safely overcome this danger?”
—Opening Narration, Mystery of the Emblem

Soulful Bridge is Chapter 8 of Fire Emblem: Mystery of the Emblem and its remake.

This is a very difficult chapter, because on the 1st turn, the promoted units ( the paladins ) on the top will start to attack your team. And right after that, the generals will begin to fight. This can easily be avoided if you skip getting Bantu, however if you do wish to get both him, Roger and Jeorge, this battle's difficulty will rise. First of all, make sure you have Gordin class changed to a cavalier to reach Jeorge quickly. Have your unit with the highest defense run into the line of fire of the paladins, and have a unit kill the thief with the Leo shard while Marth goes over to the village on the right. After the paladins attack, have the rest of the team defeat them and begin to form a wall of a few units to guard against the reinforcements that will come from below; make sure the 2 units in the front of the wall have vulneraries and good def with some ranged units behind them to pick up the slack while the front units heal. And with the paladins out of the way, Caeda can talk to Roger to join the team, and do not forget to take care of the second thief. Have a few units follow Caeda up to help take care of the snipers. Roger can take the fire of the snipers to lure them in for attack from the units that followed. One should not dare risk combat against Hardin as he is invincible thanks to the Darksphere.

After Marth recruits Bantu, do not waste any time sending Marth up to the gate to capture. With the offense team, Gordin should be able to reach Jeorge quickly. By the time Marth crosses the bridge, most likely the generals and heroes will begin their assault, Marth should hopefully be able to capture the gate by that time.

When a unit steps into any of Hardin's General's ranges, 4 Generals will spawn during the enemy phase on the top right side of the map. 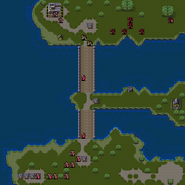