Lance
[view]
“This one is called the Altar of the Titan. This titan and his shield once fought an army of thousands without succumbing. Only those who walk the path of the baron may receive his boon.”
—Hermit explaining the Spartan class.

Spartan (スパルタン Suparutan) is a class that first appears in Fire Emblem Echoes: Shadows of Valentia. It is an overclass and functions as the promotion for the Baron class.

'Spartan' refers to somebody who is from the ancient region of Greece named Sparta. It is often used in popular culture to refer to a soldier who wears the distinct type of armour (golden plates, a large crest atop the helmet) that Spartan warriors did.

Concept art of a Spartan in Echoes: Shadows of Valentia. 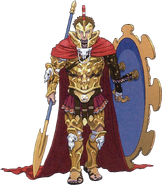 Art of a Spartan in Echoes: Shadows of Valentia.