TearRing Saga: Berwick Saga features Spear Soldier as an enemy class encountered in the early game along with Archer and Axe Soldier. Unlike Genealogy of the Holy War, there is no data for a sword and regular version of the soldier class.

Spear Soldiers are a common enemy class in Berwick Saga frequently appearing alongside other low level enemy classes. They are capable of wielding spears and small shields.

Spear soldiers are usually weak relying on equipment, strategy and numbers to pose a threat to the player army. However occasionally unique spear soldiers with higher stats may appear.

battle model of a Spear Soldier in Berwick Saga. 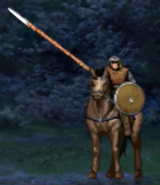 battle model of a Spear Rider in Berwick Saga.