30
[view]
The Spear of Assal is a Lance that debuts in Fire Emblem: Three Houses and one of the Sacred Weapons. It originally belonged to Cichol and effects are boosted for someone with a Crest of Cichol. The spear is found within a certain grave in the Rhodos Coast, alongside the Caduceus Staff.

In Irish mythology, the Spear of Assal (or Gae Assail in Irish) was wielded by Lugh.

Concept art of the Spear of Assal. 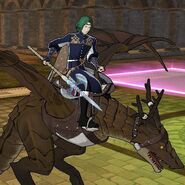 Seteth brandishing the Spear of Assal.