∞
[view]
The Spellbane Yumi is a Yumi that is introduced in Fire Emblem Fates. Like its name suggests, the Spellbane Yumi is lethal against wielders of Tomes and Scrolls, inflicting effective damage against them. The Spellbane Yumi, is, however, ineffective when armed against other weapon types, and is also hampered by the fact that it lowers its wielder's Defense when equipped. 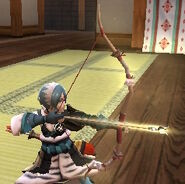