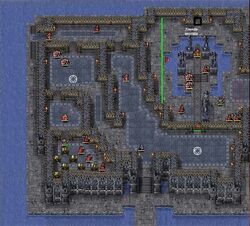 Chapter script
[view]
“The League had routed Hollstadt's knights and recaptured most of the kingdom, but there was still the castle to deal with before Altea would be free; the mage-dragon Morzas remained entrenched within its walls. Unlike General Camus who preceded him, Morzas had been a cruel warden, slaughtering many innocent Alteans at the slightest provocation. Marth roiled to think such a monster still sat upon his noble father's throne.”
—Opening Narration

Star and Savior is Chapter 17 of the game Fire Emblem: Shadow Dragon. This boss is the first Mage Dragon you will ever fight.

At the bottom left corner is a room containing 7 chests which contain: Devil Sword, Warp, Dracoshield, Master Seal, Silver Axe, Killer Bow and a Secret Book. Obtaining all of these items may be difficult without a Ballistician, high movement unit or a Warp as at the start of the chapter there are two thieves that start 2 spaces away from the chests. Additionally the thieves are prone to stealing the Devil Sword and the Warp and making a run for the top left exit that is blocked by a Mage Dragon. It is suggested that you send units such as Caeda and Marth to intercept the thieves before they are protected by the Mage Dragon or else you will lose these two items which may be valued later on (especially the Warp)

There is a Secret Shop located 4 spaces above the throne which can only be accessed if you kill the left Bishop in the boss chamber which gives you the VIP Card and the unit that is placed on the tile is holding the VIP Card in their inventory.

Once you move north past a certain area on the map (3 spaces up from a save point), a Knight and Cavalier will appear from the east each Turn, for 10 Turns. 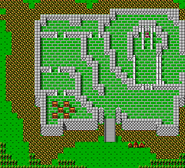