Starlight (スターライト Sutāraito) is a sacred magic tome from the Archanea Series of the Fire Emblem franchise. Forged from the Lightsphere and Starsphere, this tome is essentially used to counter the sealing effects of the Imhullu spell. When cast, this spell will call upon the mystical, prophetic energy of the stars into battle, manifesting itself in the form of an azure-coloured energy. This energy will swirl around the selected enemy target, entrapping him/her within before combusting.

In Mystery of the Emblem, the Starlight tome is initially stolen by Gharnef, but is later recovered by Michalis after the two of them engage each other in a fierce fight to the death.

Although the Starlight tome technically does not have a magic type, it is most similar to Light magic spells and has been categorized with them.

Linde will use Starlight during a Dual Strike if she's the Vanguard. The spell in this game is called 'Starlight Explosion'.

Starlight in the TCG. 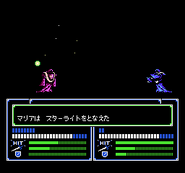 Maria casting Starlight in Shadow Dragon and the Blade of Light.

Animation of Jubelo casting Starlight in Mystery of the Emblem.

Starlight in New Mystery of the Emblem.