Starsphere (星のオーブ Hoshi no ōbu, lit. Star Orb) is a special item that debuts in Fire Emblem: Shadow Dragon and the Blade of Light. One of five spheres possessed by the Divine Dragon clan, the Starsphere is integral to assembling the complete Binding Shield, and is positioned in the top-right alcove of the shield. The Starsphere is, alongside the Lightsphere, also one of two items necessary to craft the sacred tome, Starlight.

In all games but the DS remakes (in which it and the Geosphere's colors were switched), the Starsphere has been consistently coloured blue. In the artwork portrayal of the Shield in Awakening, Azure's place on the Binding Shield is accompanied by the inscription "blue frame orb starry heavens," poorly transliterated text that is certainly intended to be "Blue Flame Orb, Starry Heavens."

The Starsphere is later mentioned at the end of Chapter 6 of Mystery of the Emblem and its remake, where Wendell informs Marth that the Starsphere had shattered into twelve shards, the result of it not being able to withstand the strain exerted on it when it was used to craft the Starlight tome. Entrusted with the task of recovering the shards, Wendell initially succeeded in locating some of the shards, but lost possession of them when he was captured by Archanea's forces and had his collection ransacked thereafter. He then urges Marth to aid him in locating all the missing shards in order to restore the Starsphere, highlighting the catastrophe that could ensue from the loss of even one of the five arcane spheres of yore. Should Marth succeed in gathering all the missing shards hidden across the chapters leading up to Chapter 14, Gotoh will then restore the Starsphere in the Ice Dragon Temple. With the Starsphere on hand, Marth is permitted to reunite with Tiki, thereafter enlisting her into his army. Alongside its other sphere counterparts, the Starsphere is later slotted into its allotted alcove on the Binding Shield following Hardin's fall in Chapter 20. With the assembled Binding Shield on hand, Marth will charge towards the dominion of Medeus to rescue the four kidnapped princesses and put an end to the War of Heroes.

In Awakening, the Starsphere is observed to have taken on a new name, Azure. Originally kept by Tiki in the canopy of the Mila Tree, she entrusts it to Chrom in Chapter 16. It is then fitted into its corresponding alcove on the Shield, alongside Argent, Gules and Vert. The Shield is later stolen by Validar at the end of Chapter 21, who telepathically manipulates Robin into wrenching it from Chrom and handing it to him. The entire set is later recovered following the events of Chapter 23.

“Needed to create a blast of Starlight. Carrying it prevents the depletion of magic and weapons.”
—In-game description, Shadow Dragon

The Star Orb, as it appears in the promotional series of the TCG. 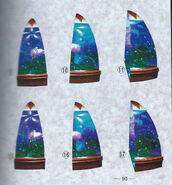 Some of the star shards that make up the Starsphere