The Steel Yumi (鋼の和弓 Hagane no wakyū) is a Yumi that is introduced in Fire Emblem Fates. One of the standard Yumi appearing in the game, the Steel Yumi is slightly stronger than its iron counterpart, although it is not as capable of performing double attacks.

Yumi is the kun'yomi reading for the Chinese character gōng (弓), which in Japanese on'yomi is pronounced as kyū. Wakyu (和弓) translates to "Japanese Bow", the kanji which is pronounced wa in on'yomi and kazu in kun'yomi is borrowed from the Chinese hé (和), which means "harmonious" or "harmony". 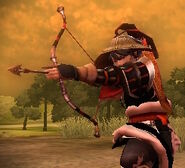 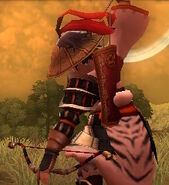 The quiver of the Steel Hankyu attached to an enemy Sniper's back.