[view]
“Have I violated the goddess's laws? Have my parents? No. Whatever happened was done by some forgotten ancestor. My parents are beorc, as were their parents before them. I do not know who is responsible for what I am. But now, after many generations, their sin has appeared in me. I bear no guilt, but the badge of impurity is mine to wear.”
—Stefan to Mordecai in a support conversation

Stefan is a playable character in Fire Emblem: Path of Radiance and Fire Emblem: Radiant Dawn. He is an extremely skilled and powerful swordsman who resides in a colony of Branded in the Grann Desert, and a direct descendant of Soan, one of Ashera's Three Heroes, as mentioned in the Path of Radiance artbook, which makes him part lion.

The Branded, being a product of the union between a Beorc and Laguz, often have capabilities far exceeding that of any Beorc, and in Stefan's case, it is his skill with the blade. He is a master swordsman, wielding the Vague Katti, and is easily able to judge the prowess of others.

Stefan joins around the mid-point of the game with a good skill, high base stats, weapon ranks, and even growth rates. He will, on average, cap his Strength, Skill, and Speed. His sword rank of S allows him to wield every non-personal sword in the game. While he is held back by the nature of the Swordmaster class (most notably his inability to retaliate at 2 range in most circumstances), his high stats make him a powerful boss killer, similar to Rutger from Fire Emblem 6 or Shannan from Geneaology. His Heaven affinity makes him an excellent wielder of the Gamble skill after receiving support bonuses, though doing such would require removing his powerful Astra skill. His only real flaw is his poor luck base and growth, which may leave him in critical range of enemies, and his relative lack of bulk would make this an issue. Despite this, Stefan requires no investment to be useful as soon as he joins, and can put in work even in the late game due to generally low enemy stats, making him a very flexible unit that can be slotted into almost any team.

Stefan is a phenomenal filler unit. He possesses high bases, and very competent growths for a third tier pre-promote. He will easily cap Speed, Skill, and HP, as well as Strength. He comes with SS rank Swords right off the bat. His defenses are also high in base and growth. His luck growth is awful, but its base is decent enough. While Mia, Edward, Zihark, and/or Lucia may have higher stats at his level, Stefan is here if none of them were trained or turned out well or survived to the endgame. 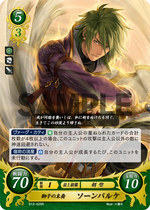 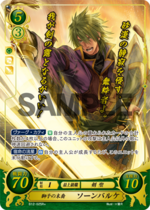 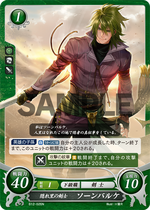 An early concept art of Stefan from Fire Emblem: Path of Radiance Memorial Book Tellius Recollection: The First Volume, where his hair color was orginally designed as blue.

Artwork of Stefan in Fire Emblem 0 (Cipher) by PenekoR.

Artwork of Stefan in Fire Emblem 0 (Cipher) by PenekoR.

Stefan as a Myrmidon in Fire Emblem 0 (Cipher).

Stefan's portrait in Path of Radiance. 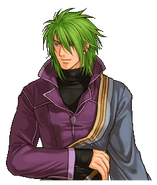 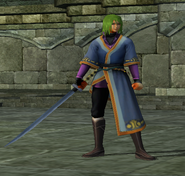 Stefan's in-game battle model as a Swordmaster in Path of Radiance.

Stefan's in-game battle model as a Trueblade in Radiant Dawn. 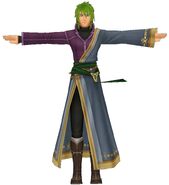