The Stoneborn (ゴーレム Gōremu, lit. Golem) is an enemy-only Monster class that first debuts in TearRing Saga: Utna Heroes Saga. Formations of rock granted life through the sorcery of fell magic, the Stoneborn either employ Axes or boulders as their weapon of choice.

In their original inception in TearRing Saga, Golems attack by means of punching their foes with their fists, ones that are classified as Axes in this game. Golems can be summoned as ally units with the Golem Staff. The promoted form of the Golem class is the Stone Golem.

In Fates, Stoneborn are artificial constructs crafted with dark magic employed by Nohr. They attack by means of either hurtling boulders or their clay masks at their foes. On the Conquest and Revelation routes, three Golems can be deployed to protect the Avatar's castle. Unlike Faceless Stoneborn are sentient, as shown with a boss Stoneborn on Birthright. Both monster races have souls, as they can appear as invaders.

Generally, Stoneborn appearing in-game are hampered by their low Hit Rate and Speed. They do make up for these deficiencies, however, with monstrous HP and incredible Strength and Defense. Each successful attack performed by the Stoneborn may potentially spell instant doom to units with poor Defense, including magic users and healers. In Fates, their new Rock-type weapons also allow them to attack from great distances, making them even more dangerous. With their HP and Defense on par with those boasted by Generals (and possibly coupled with Wary Fighter), Stoneborn are some of the toughest monsters in the games they appear in.

Golems are creature originating from Jewish forklore, usually formed of stone or clay and brought to life by magic.[1]

Concept artwork of the Stoneborn class from Fates. 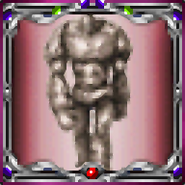 Generic class portrait of the Golem class from TearRing Saga. 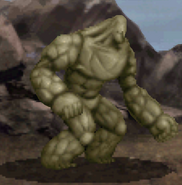 Battle model of the Golem class from TearRing Saga.

Battle model of the Stoneborn class from Fates.

Model render of the Stoneborn.

Model render of the Stoneborn, with the mask removed.