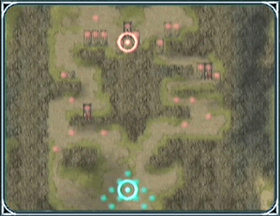 Geoffrey (if he survives chapter 24), Largo (base conversation)

Chapter script
[view]
“Ike and company break the siege of Delbray Castle and join ranks with the Crimean retainers therein. The army grows to its largest size yet, and with the addition of the retainers, truly becomes the armed force of its name. In addition, their recent heroic acts finally move the conservative Gallians to dispatch much-needed reinforcements. The long-awaited warriors of Gallia march through the treacherous Marhaut mountain range, a series of jagged peaks that spread across southern Crimea. They then slip through the gaps in the Daein forces and move toward Crimea's army. "Gallia rises." This information emboldens Ike, and he marches the army at top speed to join their new allies.”
—Opening Narration

Strange Lands is Chapter 25 of Fire Emblem: Path of Radiance.