Megan Harvey
[view]
“...Everyone... They were all killed by Bern... I couldn’t even track down the traitor in our ranks, and...our clansmen were all killed, right in front of my eyes... I was helpless, Sin. I don’t want to experience that feeling again. ”
—Sue, in a support conversation with Sin.

Sue is a playable character from Fire Emblem: The Binding Blade. She is a nomad from the Kutolah clan, the daughter of Rath, and the granddaughter of Dayan. Her mother may be either Lyndis or an unmentioned woman.

Sue and her tribemates were attacked and chased out of their hometown, when Bern invaded Sacae. She was then ordered by the leader of the tribe, her grandfather Dayan, to escape with the women and children and lead them to Lycia. However, she was eventually separated from her group, who were ambushed and massacred by members of Djute, the treacherous rival tribe that allied with the invading kingdom.

She was one of the few survivors of the massacre, and wandered alone through Lycia. She eventually found refuge in Thria, being granted the protection of the Marquess Orun. When the marquess was assassinated by his own advisor Wagner, she was taken as a prisoner in a cell.

In Chapter 6, she is rescued by Roy, who enlists her in his army. She joins the party aiming to liberate her land Sacae and to avenge lord Orun. When the party reaches the Western Isles, she can recruit her fellow nomad, Sin, in chapter 9. If the party decides to take the route to free Sacae first, Sue meets again her grandfather Dayen, and recruits him to army persuading him to fight for the cause of their land, affirming that Roy is a trustworthy leader.

After liberating Sacae, Sue shows Roy where the Divine Weapon, Mulagir, is hidden. After the war ends, she will return to her home in the plains aiming to restore her tribe, and live a humble life. Despite her wish of not wanting to be seen as a heroine of war, her people compared her to the legendary warrior Hanon.

Sue is one of Roy's love interests. She becomes his close companion and important soothing figure as they try to cheer each other and connecting with nature. If they achieve A Support, she will marry him in the ending, becoming the next marchioness of Pherae.

Sue is introverted, calm in face of danger, and has a very deep love for nature, claiming she can hear it's whispers. She lives in harmony with it, preferring the company of the spirits of nature to that of people, finding their voices comforting. Like most Sacaens, she worships the Father Sky and Mother Earth. She also seems to spend much time in meditation. She is heavily weighed down by the trauma of seeing her kinsmen die, especially that of her party, of which she was unable to save, and holds herself responsible for the deaths of her people.

She cares deeply for her comrades, as seen with her supports with Roy, where she notices that he is tired and depressed, and attempts to offer him advice as to how to relax and brighten his spirit. With Fae, she adopts an older sister role towards the young dragon and wishing to show her the outdoors, of which she's seen little. When confronted with things foreign to her way of living, like seeing how Wolt prefers shooting from the ground rather than on horseback like her kin, she's willing to attempt to see things from their perspective and try it for herself. She is particularly protective of her fellow Sacaean, Sin, as a result, to a highly verbal extent, breaking from her usual serene and softspoken nature and demanding he retreat to the back lines and let her defend him and the others.

Due to the tragedy she witnessed and feels she is to blame for, she desires to fight on the front lines in order to not feel as helpless as she was when her tribemates were slaughtered, as well as safeguard her newfound friends, of which she is highly protective of. More than anything, she wishes to continue to grow stronger so she can protect her companions. Despite seeing Bern as an enemy, while fighting in Roy's party, she refused to be controlled by hate, and instead lives for the sake of retaking what was lost.

Taking after both her grandfather and her father, Sue is a quiet girl who does not openly interact with others much, and due to her sparing usage of words in tandem with her devotion to her culture that, to others, is rather alien, she tends to accidentally confuse people she speaks to. Despite being the quiet type who speaks only when spoken to, her kind, gentle attitude can sometimes be seen when she speaks informally. She greatly respects her grandfather, who in turn is one of the few people who truly understands her, knowing her since the day she was born. She feels that she let him down by letting her fellow tribesmen die, but he absolved her of this guilt because he issued the order. After a shared ride together, Sue is finally able to overcome her guilt and despair and move forward.

Description: The granddaughter of the famed Silver Wolf of Sacae.

In contrast to the rest of the cast, Sue has very high Speed, Luck and Skill growth rates. She joins underleveled with pretty low base stats, but the fact that she's mounted will allow her to develop her main stats at a decently quick rate despite being bow-locked. Having a mount makes her a strong competitor versus the unmounted bow users (Archers and Snipers) since she can reach the enemies more easily, and she also sports rescue-dropping utility. On the other hand, her mediocre Strength growth and low base might give her a few problems for KOing enemies, but since her main use is chip damage with Bows this is not too much of a concern. She is lacking in support options in terms of availability of her partners (Dayan), support growth rate (Roy, Wolt) or both (Fae). Her support with Sin builds decently fast but she only gets partial Attack bonuses from it, which means that she cannot solve her Strength problems easily. Using both Nomads will also more or less force the player to go to Sacae, which is often undesirable. Despite its popularity, her support with Roy grows very slowly so it’s not really recommended unless the player is very patient with it.

Her Avoid is good, and she will have much higher Luck than Sin, the other playable nomad. However, Sin is better in key areas with better durability and Strength throughout the game, and he also gets Hard Mode bonuses. Sue's low Defense can be problematic if her dodge fails her, as she cannot withstand too many hits.

In the end, Sue is a good Nomad, but Sin's bases and growths are distributed better, giving him more consistency. This difference is particularly apparent on Hard Mode.

Doe of the Plains
Granddaughter of Dayan, the Silver Wolf, leader of the Kutolah tribe. She hears the voices of the sky and earth and lives in harmony with nature.

Sue - Doe of the Plains (草原の牝鹿 Sōgen no Mesu Shika lit. Doe of the Grasslands)
"Sue returned to Sacae and resumed life as a nomad. Despite playing a major role in the war, she refused to claim credit. Seeing how she chose to live her life in the vast plains which she loved so dearly, some people say that she reminded them of the "Divine Warrior" Hanon."

Sue and Roy
"Sue accompanied Roy to Lycia, where she married him and became the lady of Pherae. However, she never could cast away her love for nature, and her behavior sometimes troubled those around her who were not familiar with Sacaean culture."

“Sound of the wind... Smell of the grass...”
—Sue's Death Quote in The Binding Blade.

Sue makes a brief cameo appearance in chapter 17 of the Hasha no Tsurugi manga.

Sue is illustrated in the trading card game Fire Emblem Cipher with the following cards: 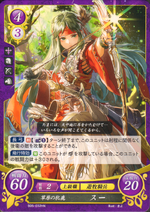 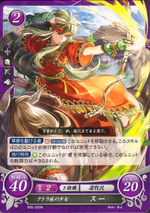 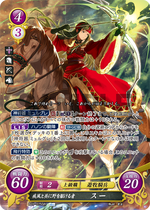 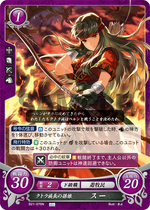 Sue is a variation of the name Susan, originated from the greek name Susanna, which in turn comes from the Hebrew Shoshannah, meaning Lily or Rose.