David Stanbra
[view]
“Once I was a king, but now I am a lowly servant to Anankos. My fall did bother me, for a time...but no more! Not with opponents like you! I'm so happy, my children. Look how strong you've become! Strong enough to fight your way here. This will be a glorious battle. Come! Show me what you're capable of—show me how much you've grown!”
—Sumeragi while engaging Ryoma and Corrin.

Sumeragi is a boss character from Fire Emblem Fates.

Sumeragi is the deceased king of Hoshido. He is the father of Ryoma, Hinoka, Takumi, and Sakura through his first wife, Ikona, and the stepfather of Corrin by marrying Mikoto. He also is the paternal grandfather of Shiro and Kiragi.

Prior to the events of Fates, Garon called Sumeragi to Cheve to discuss negotiation terms due to the war between Hoshido and Nohr. Sumeragi took the Corrin with them, believing that Garon was willing to end the war. When he arrived, Garon revealed to him that it was a trap, and ordered his soldiers to attack. Sumeragi sacrificed himself so that Corrin would be protected from the barrage of arrows, then was finished by Garon.

The truth of his relation to Corrin can be revealed in one of two ways; the most common being if Corrin achieves an S-support with the Hoshidan royals. Alternatively, in Chapter 24 of Revelation, Mikoto herself will reveal Corrin's origin. Sumeragi will further elaborate in the following chapter with his side of the story.

In Chapter 5, Sumeragi appears as a hooded man, drawing Corrin's Ganglari to him in an attempt to kill Corrin. He explodes the sword at the town square, destroying most of the surrounding area and killing the people at the square. Despite this, Corrin still survives. In response, Sumeragi uses the sword to throw shards of metal at them, but Mikoto sacrifices her life to protect them. Ryoma challenges the Hooded Man after knowing he is the suspect, unaware of his true identity. As Corrin is still alive, he calls Vallite soldiers to help finish the job. However, he is no match for an enraged Corrin and seemingly disappears after his defeat.

In the Birthright route, Sumeragi appears again very briefly in Chapter 11, appearing on the Corrin's ship, calling in reinforcements of Vallite soldiers to attack the army during a storm to hopefully sink the ship with the Corrin's army on. At the end of the chapter, everyone assumes that everything is fine, until Sumeragi appears once more trying to kill Takumi while he's unguarded. Zola jumps and takes the blow, although not dying from the attack, and tells Takumi to attack while Sumeragi has his guard let down. Blocking the attack, Sumeragi retreats from the boat, although the army believe Takumi killed the Vallite soldier, and then Sakura heals Zola's wounds, forgetting about Sumeragi's disappearance. Sumeragi is never seen again throughout the playthrough, nor is revealed to be Sumeragi.

Sometime after his death, Anankos revived him as his puppet. Sumeragi reappears in Chapter 25 first appearing in his hooded outfit seen in Chapter 5 where he reveals that he was the one who killed Mikoto. He commends the Hohsidan siblings for becoming strong. Driven by a lust for battle he commands that his children give him the best fight of his life.

After crossing blades with his family, Sumeragi is defeated. As he lays on the ground, the Hoshidan siblings quickly surround him and desperately try to save him. However, he simply praises his children for surpassing his expectations of them. He also apologizes to Corrin for not being strong enough to protect them the day he was killed. However, Corrin tells him that the few memories they have of him are filled with happiness and love. He also asks if they saw Mikoto before battling him, which Corrin affirms. Sumeragi's body begins to dissipate as he finally can express that he can die with no regrets, knowing that his children will be able to finish the fight against Anankos.

Sumeragi serves as the boss of the first part of Hidden Truths, where he and a group of Vallites have been tasked with hunting down Anankos' "heart". He and his soldiers attack Owain, Inigo and Severa, who Anankos had asked to help him with his problem. Despite their overwhelming numbers, Sumeragi is eventually defeated and escapes back to Valla.

As the king of Hoshido, Sumeragi was benevolent to his people and treated them fairly. When he was not busy with policies, however, Sumeragi cared deeply for his family, having fun with them as he wanted to be the best father he could. He cared very little of being the Hoshidan King and took little enjoyment out of it. However, in Female Corrin and Yukimura support conversations, it is revealed that he would always be happy to see his children after a long day. Sumeragi also has a different view in warfare; in a support conversation between Yukimura and male Corrin, Sumeragi told him that there is no point in killing soldiers who have surrendered and disliked killing the enemy without letting them have a chance to surrender.

Fuga explains to male Corrin that Sumeragi was a bit of a troublemaker in his youth, he loved to play tricks on the servants (and in the Japanese version, he hung around the capital's red-light district at times), but mellowed out as he grew older.

Under the control of Anankos, Sumeragi became much more battle-hungry, thrilled at the opportunity to face both his eldest son and his step-child in battle. After his defeat, Sumeragi is released of this bloodlust; he expresses pride in his children who have grown since his passing and remorse for being unable to prevent Corrin's kidnapping. He imparts them with his faith that they will help Corrin bring an end to the Silent Dragon.

The late King of Hoshido who lost his life trying to save Corrin's. (as "Sumeragi")

“ I was once a Hoshidan king...No longer. Now I am simply a man on the battlefield...striving for a challenge. ”
—Sumeragi's pre-battle quote

“I am Sumeragi--King of Hoshido no more, yet still a deadly swordsman!”
—Sumeragi's pre-battle quote

(teleports to the inner map as an ally unit)

Sumeragi is illustrated in the trading card game Fire Emblem Cipher with the following cards: 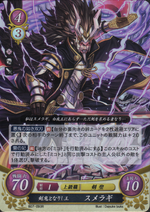 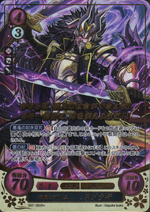 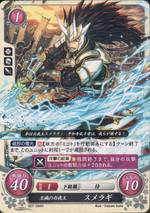 Sumeragi (皇) can translate as "emperor" in Japanese kun'yomi reading.

If the character of Sumeragi is broken up, it can be read as 白王 which translates to "White King", which references the Kingdom of Hoshido's Japanese name, Byakuya Oukoku (白夜王国), meaning "White Night Kingdom."