Eden Riegel
[view]
“I'm so sick of being the girl whose main contribution is falling on her face! I know we all need levity in these times, but I would still prefer to do more.”
—Sumia to Frederick in their supports

Sumia is a playable character from Fire Emblem Awakening, and a member of Chrom's Shepherds. She is the mother of Cynthia, and can be a potential mother of Lucina and Morgan.

Sumia is first introduced in Chapter 2 when Lissa brings Robin to the Shepherds barracks. When she approaches Chrom she promptly trips, leaving her embarrassed. Chrom announces that they'll be marching to Ferox to seek aid from them to deal with the constant threats of war from Plegia. Sumia tells Chrom that she doesn't think she's ready for a battle yet, so Chrom tells Sumia to stay behind and watch and learn.

After defeating the Risen at Northroad, Chrom finds a pegasus who scares him. Sumia appears and calms the pegasus. She decides to stay a little while longer to heal the injured pegasus, promising to catch up soon. Later, when the party arrives at The Longfort, the Feroxi army believes that Chrom is an impostor and promptly attacks him. Just as Chrom is about to be hit by multiple Javelins, Sumia makes a timely rescue on the pegasus she encountered earlier. Robin becomes inspired by Chrom and Sumia riding on the pegasus to create the Pair Up strategy.

Before learning of Emmeryn's sentence in Plegia, Chrom is in internal strife from worrying about his sister. Worried about him, Sumia tries to snap him out of his doldrum. Remembering advice from Philia, Sumia punches Chrom in the face. While the hit manages to snap Chrom back to his senses, Chrom is left slightly dazed. Lissa reveals to Sumia that normally people slap people in the face to snap people out, much to Sumia's embarassment.

Sumia and her best friend, Cordelia, notably share a crush on their captain and prince, Chrom. Among other potential love interests, Sumia can possibly marry him, while Cordelia is unable to do so, due to deciding to not act on her feelings. However, Sumia can quickly move on and fall in love with someone else, forming a happy family with either Robin, Frederick, Gaius or Henry, while her friend’s feelings for the Prince endure longer under the same circumstances. It’s noted though, that Sumia is remembered as one of Chrom's best friends by historians, as mentioned by Cynthia. She also can potentially develop a close friendship with Sully.

In the original future, her time traveler daughter, Cynthia, reveals that once Sumia eventually perished fighting against Grima's army, her last action was sending her pegasus back to protect and look after her daughter. The pegasus which Cynthia rides, is the same mounted by Sumia in the current timeline.

Should Chrom marry Sumia at the end of Chapter 11, Sumia becomes the new Queen of Ylisse and will give birth to Lucina two years afterwards. After the ambush on Carrion Isle, "Marth" reveals her identity as his daughter, Lucina from the future. Sumia at first does not believe that she is Lucina until she sees the Brand of the Exalt on her left eye, the same one on baby Lucina. After Lucina shares her story of the alternate future, Sumia and Lucina share a tender moment as Lucina happily hugs her mother, finally reunited.

If Sumia is not married at the end of the war, she lays down her lance and receives a stretch of land from Chrom to raise Pegasi and her flower fortunes were said to bring good luck to those who received them from her.

Sumia is kind soul who loves flowers and animals. She is a very klutzy individual, prone to small mishaps. In fact, her clumsiness is so bad that she trips over nothing more than anyone in the Shepherds, much to her embarassment. Because of this, she has a rather low self-esteem and feels that she is unsuited for her job, but still does her best whenever she can. Despite her clumsy habits, she holds a hidden strength that most people lack, constantly striving to protect her friends and take care of them.

She has a strong affinity for animals and can read their feelings very well. She used this ability to calm and tame an injured pegasus that was feral to everyone else. Even a horse that Frederick could not tame was quickly quelled by Sumia. Her best friend is her fellow Pegasus Knight Cordelia, who is always there to help her when she is in trouble, and admires her flawless demeanor. Still, she has shown to be courageous, caring, and kind, willing to fight for her people.

Sumia loves reading books as she uses them to escape reality and her flaws. She sometimes role plays as the characters in the stories in hopes of becoming more confident. Sumia collects discarded books and loves to recommend them to others such as Robin. Her favorite stories are the Ribald Tales of the Faith War.

Sumia also enjoys doing flower fortunes and often plucks hundreds of flower petals at a time. Sumia does this to give her a boost in confidence in battle; bad fortune readings motivates her to overturn them while good fortunes encourages her to make sure that they come true.

As the first aerial unit recruited, Sumia can be very useful utility early on, and continues to be a very solid throughout the game. In terms of her stats, she gains skill, HP, and speed quickly, with her other stats growing decently well. Pairing her up with a compatible unit can highlight her potential, as her mobility is a great asset, and her Speed and Skill pair-up bonuses allow them to frequently double and finish off opponents much more easily. As an archetypal Pegasus Knight, she can be somewhat fragile and sometimes lacks offensive capability against high defense units like knights on higher difficulties. Keeping her out of range of Archers will ensure that she stays as safe as possible.

In contrast to Cordelia, Sumia's magic growth rate and stat caps in magic are higher, giving her utility as a Falcon Knight healer or offensive diversity as a Dark Flier mage. However, the growth is still quite low, and her magical offense may take some time to catch up to other Magic units in the game, but may become worthwhile. Her higher speed and skill will also mean that she will double attack and critical much more often. Sumia should spend some time in the Dark Flier class regardless of the player's final class for her since she can learn the useful Galeforce skill. It is also important to note that her magic caps in the Dark Flier class are higher than her strength caps as a Falcon Knight, and access to both Lancefaire and Tomefaire (as well as the high-damaging Luna skill) make her a potent force while in this class, capitalizing on both her mobility and offensive prowess. Nevertheless, Sumia as a Falcon Knight has its perks of slightly higher speed and skill caps over Dark Flier. Furthermore, her access to Healtouch from the Cleric line makes her capable in healing, in addition to the class's Lancefaire skill padding her offensive capability.

Sumia's two class options are Cleric and Knight. As a Cleric, she may lose her ability to attack but she learns Miracle, which given her high luck, she can survive battles in dire situations. As a War Cleric, Sumia is as strong as Lissa, but is faster and has higher skill. The biggest gift from this class is Renewal, which should be on her regardless of her ultimate class since Relief alone is not useful in tight gameplay. Sage wise, Sumia is not as stellar as Miriel or Ricken, and the skill to pull from this class would be Tomefaire to boost her magic offensive as a Dark Flier.

Sumia as a Knight makes for a very interesting unit. She is much faster than Kellam and has more skill, leading to more double attacks and criticals. Sumia learns a few worthwhile skills in the Knight tree. The General class's Pavise can be useful for patching her shoddy defense. Great Knight's Luna, as mentioned, gives Sumia more damage output which gives her the ability to severely damage high defense units. Dual Guard+ is also great for her to protect her in times of need as well as give her partner a boost to Dual Guard activations.

Sumia also has the option to be a solid Rally unit, as she has 5 Rally skills at her disposal: Rally Speed, Rally Movement, Rally Magic, Rally Luck, and Rally Defense.

Sumia - Maid of Flowers
With Chrom's permission, Sumia traded her lance for a peaceful stretch of pasture on which to raise pegasi. Her flower-petal readings were said to bring good luck, and many asked her to tell their fortunes.

Many wrote of Robin's legendary exploits, but accounts of his origins and character varied. Scholars, poets, and bards agreed on one thing alone—he loved his wife, Sumia, above all else.

Sumia and Chrom
After Grima's defeat, Chrom was officially welcomed as Ylisse's new exalt. Queen Sumia lived and breathed for him, and her flower-petal readings were said to bring good luck to all who received them.

Sumia and Frederick
As Ylisse's new knight captain, Frederick took charge of keeping the peace and training new recruits. His wife, Sumia, traded her lance for a peaceful stretch of pasture and raised a happy group of pegasi.

Sumia and Gaius
Gaius never lost his sweet tooth, though he ultimately returned to less savory enterprises. His wife, Sumia, raised pegasi, and her flower-petal readings were said to bring good luck to all.

Sumia and Henry
Henry settled down with Sumia and turned out to be a surprisingly good father. Their newborn daughter was enthralled by her mother's pegasus and was soon begging for a spot on the saddle.

Sumia does not directly appear in the Super Smash Bros. Series. However, one of Lucina's Palette Swaps is based around Sumia's color scheme. She is also briefly mentioned in Cordelia's trophy description.

Sumia is illustrated in the trading card game Fire Emblem Cipher with the following cards: 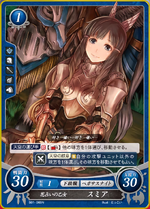 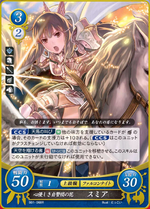 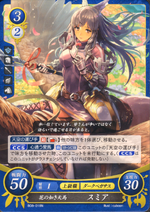 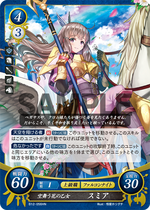 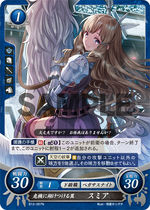 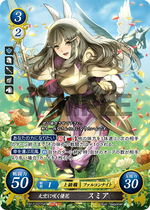 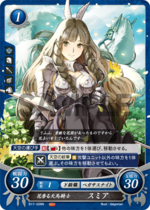 Sumia is an Islamic name that means "The one who listens".[1]

It could be a variant of the Arabic feminine name Sumayya, meaning "high above", possibly referring to her class as a pegasus knight.[2]