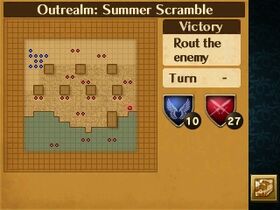 Chapter script
[view]
“The merchant Anna invites Chrom and his gang to a beach retreat to thank them for saving several worlds. However, they didn't expect plunderers to appear...”
—Opening Narration

Summer Scramble (絆の夏 Kizuna no Natsu lit. Summer of Bonds in the Japanese version) is Xenologue 17 of Fire Emblem Awakening. This chapter takes place in the Outrealms, also known as the Hotrealm in this chapter.

This map features many conversations between the parent characters who normally do not support each other in the main game. Chrom, Gaius, Tharja, and Cordelia each have a special scene where they don a swimsuit, and they also have special conversations with Robin. Any character that is a Sorcerer will wear a swimsuit in battle in this map. This map is recommended for those who love dialogue between characters.

There are plenty of bandits to deal with, including some Sorcerers, Warriors, Berserkers, Tricksters and Barbarians, which use high-level equipment, such as Tomahawks, Silver Axes and Ruin. At the bottom of the map contain Wyvern Lords, Wyvern Riders and Griffon Riders. The majority of the enemy uses axes, so having sword users may be helpful.

(*): These conversations will have a slightly altered dialogue with a few additional lines if Robin is married to that character.
(+): Chrom and Cordelia's conversation will only occur if Cordelia is still single. 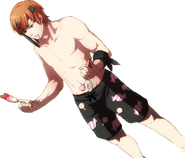 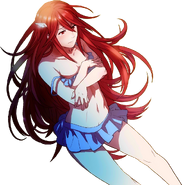 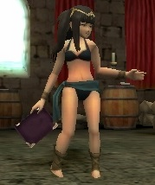