“I don't think you're a child, Frau! You're kind, and dependable! We've been great partners these last couple months, haven't we? The only reason I've made it this far is because you've been there the whole way. It's been a blessing to fight alongside you. I'll never forget about the things we've been through as long as I live.”
—Sun, in a conversation with Frau

Sun (サン San) is a playable character from TearRing Saga: Utna Heroes Saga. She is a fifteen-year-old knight in training from Canaan. She is also the daughter of Silva and the granddaughter of Barbaross.

During the game's events, Sun is posted under the command of Lionheart by Silva, who is concerned for her safety, but nonetheless wishes for her to gain experience. She is introduced when she first meets Frau, who shares her desire to prove herself as an adult. The two of them quickly become close friends and agree to work together to help Lionheart. When Holmes arrives in Blood, she and Frau mistake him for an enemy and engage his army in a battle. After being recruited by Mahter, Frau can talk to Sun and clear up their misunderstanding regarding Holmes's intentions.

In the ending, Sun becomes a full-fledged member of the Arless Black Knights, making her a subordinate of Silva. Before separating, she and Frau make a promise to always be best friends.

She appears as an enemy unit in Map 15. To recruit her, either have Frau speak to her or keep her alive.

Sun is a seemingly unremarkable unit who joins at a low level at first glance. However, she possesses great potential, including several powerful skills to learn and an excellent promotion. Because she is recruited into Holmes's team, she can be trained in an infinite number of monster battles soon after she joins, making her level issues much less apparent. She often ends up becoming quite powerful, and if the player is willing to invest heavily in her, she is a recommended character to use. It is recommended to give her the Anti-Evil skill, as she'll become easy to train on the large amount of Mogalls that appear in the ensuing chapters. If trained well, she will easily be able to promote with the Knight's Crest that is obtained in Map 16.

“Thieves will not be tolerated!”
—Sun's battle quote as an enemy in Map 15

Sun's portrait as a Black Knight. 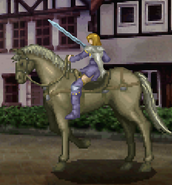 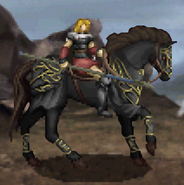 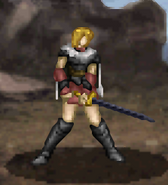