[view]
“SETTLE IT IN SMASH!”
—North American tagline for Smash Bros. for Nintendo 3DS and Wii U

Super Smash Bros. for Nintendo 3DS and Wii U were first announced during E3 2011 by then Nintendo CEO Satoru Iwata with no formal title and the title yet beginning its development.

Masahiro Sakurai, the series creator, first started working on the project after completing Kid Icarus: Uprising the following year. The game was revealed to be co-developed by Bandai Namco and both the 3DS and Wii U titles were announced at E3 2013 with the reveals of both the Animal Crossing Villager and Capcom's Mega Man. No formal release date was released at the time other than an estimated release of Winter 2014. Both titles were considered the fourth and fifth installments respectively by Sakurai, but shared many features with each other including the same total roster and the ability to share data between the two games. Nintendo also debut their amiibo line of figurines with the game with functionality between both games and many others with their line of amiibos.

Over the course of nearly two years, the dedicated Smash Bros. website released daily photos of in game content, ranging from new stages, items, and Veteran Fighters. Marth was the first Fire Emblem franchise representative to be revealed on November 7, 2013 and Ike was later confirmed on May 22, 2014.

Unlike previous titles, all newcomers to the series received special reveal trailers, generally during a Nintendo Direct. The Fire Emblem franchise received two Newcomers in one singular trailer, revealing both Robin (in both their genders) and Lucina would join Smash.

In total, the Fire Emblem franchise received much representation in the title, having six total playable fighters (eight if both genders of Robin and Corrin are individually counted), one brand new stage for both titles, totaling in three playable stages, the return of Lyn as an Assist Trophy, Chrom's appearance in Robin's Final Smash, and Sword Mii Fighter costumes based on Chrom and the Black Knight.

Marth was confirmed to return in Super Smash Bros. for 3DS/Wii U on November 7, 2013. Marth's appearance differs in this game than in previous Smash games as he now appears in the redesign he received in Fire Emblem: Shadow Dragon and Fire Emblem: New Mystery of the Emblem. Unlike the previous entries, Marth is playable from the start and does not have to be unlocked.

Marth in Super Smash Bros. for 3DS/Wii U

Ike was confirmed to return for Super Smash Bros. for 3DS/Wii U on May 22, 2014. Like Marth, Ike's outfit is different than it was in Brawl; instead appearing in his Hero design from Fire Emblem: Radiant Dawn. As a new aesthetic, any of Ike's moves involving fire will be blue rather than red, matching his title as the "Hero of Blue Flames."

Ike in Super Smash Bros. for Nintendo 3DS and Wii U

Roy was leaked on June 13, 2015 and officially revealed and released on June 14, 2015 for Super Smash Bros. for 3DS/Wii U as a DLC character. Like the other Fire Emblem veterans in the series, Roy received a redesign in both versions, however his was not based on any of his previous appearances, meaning that Roy is the only one to receive a completely original design for the game. For the most part, Roy remains largely the same as he did in Melee with a few different moves to make himself different from Marth. 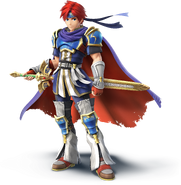 Roy in Super Smash Bros. for 3DS/Wii U

The Avatar of Awakening, under their default name Robin, was confirmed on July 14, 2014 as a newcomer for Super Smash Bros. for 3DS/Wii U with Lucina. Both genders of Robin are playable and their default weapon is a Levin Sword, which is activated by using smash attacks. Alluding to the Weapon Durability mechanic in the Fire Emblem series, their Levin Sword will break after a certain amount of attacks resulting in Robin wielding a Bronze Sword until the Levin Sword regenerates. Their Special moves revolve around numerous tomes from Awakening and changes depending on the special used. Like the Levin Sword, tomes will eventually break after a certain amount of uses. 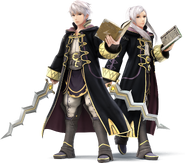 Both Robins in Super Smash Bros. for the 3DS and Wii U

“Warrior from a Doomed Future”
—Lucina's Alias on Punch-Out!! stage.

Lucina was confirmed on July 14, 2014 as a newcomer for Super Smash Bros. for 3DS/Wii U with Robin. According to Masahiro Sakura, Lucina was originally intended to be an alternate costume for Marth, but was given her own spot in the roster with minor differences. Her version of the Falchion delivers equal power no matter which part of the sword hits, lacking Marth's stronger tip attacks or Roy's hilt attacks. She can also don her mask when she was disguised as Marth in one of her taunts. Lucina is the only Fire Emblem representative that is required to be unlocked in the 3DS and Wii U versions. 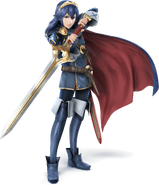 Lucina in Super Smash Bros. for 3DS and Wii U

The Avatar of Fates, under their default name Corrin, was confirmed on December 15, 2015 and released on February 3rd, 2016 as a DLC newcomer for Super Smash Bros. for 3DS/Wii U. Both genders of Corrin are playable and their default weapon is Yato in its Omega form. They retain many aspects of the Nohr Prince/Princess class including the ability to shift parts of their body or their entire body into their dragon form through usage of their Dragon Fang ability. 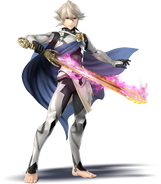 Male Corrin in Super Smash Bros. for 3DS/Wii U 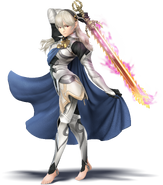 Female Corrin in Super Smash Bros. for 3DS/Wii U

Chrom was shown during the July 14th, 2014 newcomer trailer for Robin and Lucina. Chrom exists in Super Smash Bros. for 3DS/Wii U, but only in Robin's Final Smash and even has the Critical Cut-In like in Fire Emblem Awakening. He makes a special cameo appearance during a Palutena's Guidance conversation when Pit faces Robin on Palutena's Temple, speaking with Pit, Palutena, and Viridi on Robin's strengths. He also sometimes appears in one of Robin's randomly selected victory poses at the results screen after a match.

Later, on July 31, 2015, a Mii Swordfighter outfit based on Chrom, wielding the Falchion, was added as paid DLC.

Chrom as he appears in Super Smash Bros. for 3DS and Wii U

The Mii Swordfighter outfit based on Chrom.

Lyndis was confirmed on April 8, 2014 to return in Super Smash Bros as an Assist Trophy once more. Her assist works exactly the same as it did in Super Smash Bros. Brawl. Upon appearing, Lyn charges up her Mani Katti and vanishes, appearing beside an enemy to perform what resembles her critical attack from The Blazing Blade. In Brawl, the Assist Trophy of Lyn is known for its high damage rating, knock back, and accuracy. Also, when she appears she sometimes says one of Ike's taunts, "Prepare yourself" but usually says "I'll handle this".

Lyn as she appears in Super Smash Bros. for 3DS and Wii U

An Mii Swordfighter outfit based on the Black Knight from Fire Emblem: Path of Radiance and Radiant Dawn was added as paid DLC on July 31, 2015. The outfit comes complete with the Alondite sword.

The Mii Swordfighter outfit based on the Black Knight.

Arena Ferox stage is featured in the 3DS version and is the only Fire Emblem stage in the game. The Stage's floor has the exact same pattern as its namesake map and the large crowd seen in the background during a battle also appear on the map. The stage starts out as a flat stage with no features. This version is also the set-up for the Omega/Final Destination version of the stage. After a few seconds, the stage will change into one of 4 different variations with special features for each.

A complete view of one of the variation of the Arena Ferox stage layout.

A transition of the stage containing ruined remains of various columns

A transition of the stage containing platforms hanging by chains

The Colosseum stage is featured in the Wii U version. It pays homage to many of the past Arena features in previous Fire Emblem titles. The stage starts off as a flat stage with no elevated platforms and characters can walk off screen. At certain times during a fight, platforms will raise from the ground creating elevated platforms to fight from. The platform heights and amount of platforms raised varies.

Castle Siege returns as a stage for the Wii U Version. It remains largely unchanged from the Brawl version.

"ID~Purpose" is the theme for the final chapter of Fire Emblem Awakening. It has been slightly shortened to play the Awakening theme and Fire Emblem theme sections once each instead of twice. It is also added to the Red Super Smash Bros. for 3DS/Wii U disc.

"Fire Emblem is the Melee rendition of the recruitment theme, Together, We Ride and the Fire Emblem Main Theme.

"Mila's Divine Protection (Celica Map 1)" is the Brawl rendition of the map theme for The Pilgrimage in Fire Emblem Gaiden.

"Lost in Thoughts All Alone is the song sung by Azura and is the main theme of Fire Emblem Fates. It is sung in parts multiple times throughout the different routes of the game. The localized version is played in all non-Japanese versions of the game. if一人思う, the Japanese version of the song, is available only in Japan.

Against the Dark Knight in Path of Radiance, alternatively known as Unstoppable Destiny in Radiant Dawn, is the battle theme for the Black Knight.

Conquest (Ablaze) is the Player attack theme in Awakening during random Risen and Parley battles.

Crimean Army Sortie, known as Crimea Attacks in Path of Radiance, is the overworld theme of Chapter 19 from said game.

The Devoted is the attack theme of the Greil Mercenaries in Fire Emblem: Radiant Dawn.

Duty (Ablaze) is the Player attack theme in Awakening during Chapter 3 and Chapter 4.

Id (Purpose) is the theme of the Endgame in Awakening. Like the 3DS game, the music is shortened.

Time of Action is the Apostle's Army's attack theme in Radiant Dawn.

Victory is Near is an overworld theme in Path of Radiance that plays once players nearly complete a map.

Lost in Thoughts All Alone is the song sung by Azura and is the main theme of Fire Emblem Fates. It is sung in parts multiple times throughout the different routes of the game. The localized version is played in all non-Japanese versions of the game. if一人思う, the Japanese version of the song, is available only in Japan.

Attack is the Brawl remix of the Attack theme from The Blazing Blade, also known as Fire Emblem to western audiences.

Coliseum Medley is a medley of Arena themes from Shadow Dragon and the Blade of Light/Shadow Dragon, Path of Radiance, and Sacred Stones.

Fight 1 is a remix of the map battle theme of the first Alm Chapter in Fire Emblem Gaiden.

Fire Emblem is the Melee rendition of the recruitment theme, Together, We Ride and the Fire Emblem Main Theme.

Meeting Theme Series Medley is an orchestrated medley of the recruitment themes Together We Ride from the Archanea series and its remakes, Comrades from Sacred Stones, and Recruitment from Genealogy of the Holy War, and In the Chapter ~ Joining an Army from Thracia 776. Trouble! from Shadow Dragon and Shadow Dragon of the Blade of Light also plays several times throughout the track.

Preparing to Advance is the Brawl remix of the music theme of the same name from Sacred Stones. 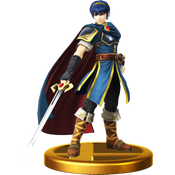 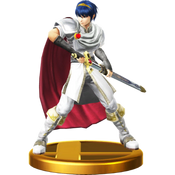 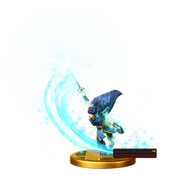 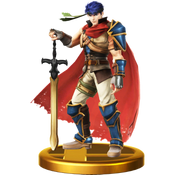 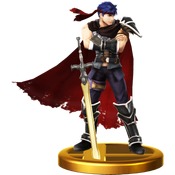 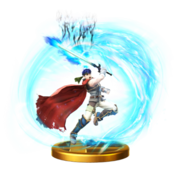 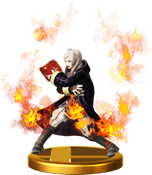 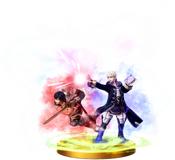 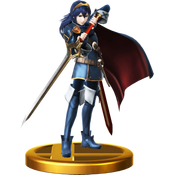 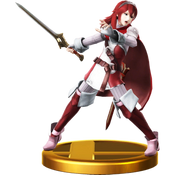 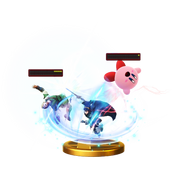 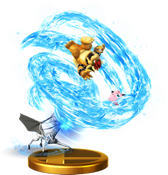 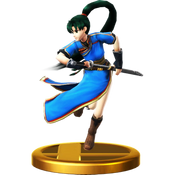 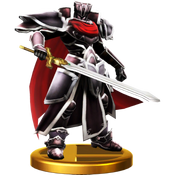 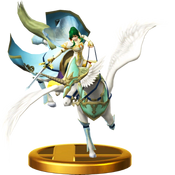 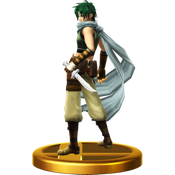 As a part of Nintendo's new interactive figure line, the amiibo were first introduced alongside Super Smash Bros. for Nintendo 3DS/Wii U. The amiibo line for Super Smash Bros. are comprised solely of all playable characters in game, including the DLC fighters. The Fire Emblem franchise received seven amiibo for the six represented characters in the game. The Marth, Ike, Robin, Lucina, and Roy have been released while Corrin amiibo for both genders has been announced for future release.