The Superior Bow (弓殺しの弓 Yumi-goroshi no yumi, lit. Bow Killing Bow in the Japanese version) is a Bow that debuts in Fire Emblem Awakening. As can be inferred from its name, this bow is practically unrivalled by most other bows available in the game. This is principally due to the fact that the Superior Bow grants its wielder the Bowbreaker skill when equipped, a skill that grants them a set of bonuses that give them the upper edge when engaging a bow-wielding opponent in battle.

It reappears in Fire Emblem Warriors under the name Bowbane Bow, available exclusively via downloadable content, where it comes with the Bowbreaker attribute built-in, allowing it to deal additional damage against other bow wielders. 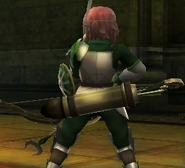