Kirk Thornton
[view]
“Those who shrink from the flames... Those who, when confronted by true power, have no choice but to bow... Listen to me now. I am Surtr. I am your king.”
—Surtr

Surtr is the main antagonist of Book II from Fire Emblem Heroes. The king of the flame kingdom Múspell, he is also the superior of Book I's antagonist Loki and the father of Laegjarn and Laevatein.

Surtr is the king of the Kingdom of Flame Múspell and relentless in his conquest. He is planning to destroy other kingdoms, particularly setting his sights on Askr, having already destroyed 2 in 9 months, the first being an unnamed Kingdom in 3 months, and Nifl, the Kingdom of Ice, in 6. Surtr has also allied himself with Veronica and the Embla Empire, as stated by her in Chapter 1, Part 4 of Book II. He first appears the end of Book II, Chapter 1, where he burns up many fields and forests and defeats Fjorm.

Alfonse and Anna both state that this is the prophecy in which the entire world comes to an end in flames, prompting them to take on the Flame King himself, however, he is currently unable to even be harmed as he carries a power similar to Embla's Ward, called Múspellflame, forcing the Order of Heroes to retreat.

In Chapter 4, he and his forces appear to confront the Order of Heroes as Fjorm is preparing the rite to reactivate the gate to Nifl. He threatens Alfonse, stating that if they leave then he will be unopposed to destroy a nearby Askran town and kill everyone living there. As the Order escapes through the gate, Surtr orders that his forces advance on the town, but is opposed by Veronica, who wishes to conquer Askr, rather than destroying it. Surtr then prepares to face her and Xander, only to be stopped by Loki, who points out that the town is empty after Alfonse sent them a signal to evacuate. At Loki's suggestion, Surtr decides to keep Veronica alive for now and sends Laevatein after the Order.

In Chapter 7, Surtr somehow arrives at the kingdom of Nifl, where he ambushes and viciously attacks Gunnthrá in the sanctuary at Snjarhof before the Order of Heroes arrived. He then shows Fjorm Gunnthrá's burnt body, though he wasn't told about her plans. Surtr then ignites his flames on her, burning her to death. After Gunnthrá dies, he was surprised that Kiran may be the one whom the Order of Heroes trusts when she gave her remaining powers to the Breidablik. Surtr decides that Kiran will be his next victim to get burned.

During Chapter 8, Surtr ordered Veronica to go to the Kingdom of Múspell, and should she refuse, he will break her legs and drag her there himself. When Xander confronts him to protect her, Surtr continued his fight with them. He effortlessly defeats them both as an act of betrayal and he broke Xander's arm. After Veronica finally gave in and decided to go to Múspell, Surtr spared Xander's life and, according to Loki, he will sacrifice Veronica by casting her into the fire as an offering to the Kingdom of Flames.

In Chapter 10, as Surtr mocked the Order of Heroes when they confronted him, he was weakened by Kiran's Breidablik, neutralizing his Muspellflame, leading Surtr to be finally defeated. However, much to the Order's shock, he came back to life almost immediately after without any injuries, taunting them that there is no hope for them to kill him. As he prepares for his finishing blow, the Order was forced to retreat. It is later revealed through Laegjarn that Surtr had already completed the Rite of Flames, and notes that he would indeed have been killed by the Order of Heroes if he had not done so.

In Chapter 13, Surtr stabs Laevatein as punishment for failing to defeat the Order of Heroes, causing Laegjarn to intervene and sacrifices herself to the Rite of Flames, which leads to her death. He then encounters Helbindi, who was helping Ylgr and Veronica escape, and presumably kills him, but not before Helbindi threatens that death is what he deserved. When the Order of Heroes arrive for the final battle, he fights them himself, and, since the Rite of Flames has no more to sustain itself, Surtr is truly killed.

However, in Xenologue 4, he is revealed to have been recruited by Hel after his demise to serve under them, with him resigning to his fate, stating that he cannot best the ruler of the dead, but points out that the Order of Heroes might oppose them. His prediction is proven true when Hel is defeated and killed and it's later implied that Surtr's been released from Hel's grasp.

In Book IV an illusion of Surtr appears after the Order of Heroes return from Ljósálfheimr but luckily the heroes are able to defeat it.

A stern ruler, Surtr believes that his power gives him the right to conquer and destroy every other kingdom, wanting to burn Askr to the ground just for the sake of it. This is further expanded upon his unit quotes, as he considers the purpose of the weak to be dominated and disposed of, while the strong are to manipulated and used, with the latter particularly expressed by Surtr when declaring that Kiran has the right to do as you please with him since they bested him.

Though willing to make temporary alliances to further his own ambitions, he prefers to sadistically remove any kind of obstacle by slowly torturing and killing them, as he forces Fjorm’s mother to burn up slowly and painfully in front of her eyes, and planned early on to turn on Veronica and invade Embla, delighted at the thought of her death. Surtr also gets bored easily, as shown by his disinterest in killing the Ice Princess, since she is defeated too easily by him.

In addition, Surtr does not tolerate failure and weakness and is known to severely punish his own subordinates for failing him, even killing their friends and family, as seen with Helbindi, whose sister was killed when Surtr burned the slums where he grew up. This behavior even extends to his own children, as he isn't afraid of killing them if they are deemed weak, as both him and his daughters imply in their quotes, then seen when he attacks Laevatein for failing to defeat the Order of Heroes and deciding that she would be more useful as a sacrifice to the Rite of Flames.

In Xenologue 4, after his death, Surtr has become more calm and shown to be knowledgeable around beings stronger than him like Hel. Despite being so powerful, he knows that even he can't beat her, but due to his interactions with the Order of Heroes, he believes they may be powerful enough to stop her.

Surtr remains the terrifying force he was in Book II as he is both offensively and defensively strong. His high stats across the board is well distributed with his only weakness being his low speed which is easily covered by his base kit. He is a problematic unit as he can easily fight a majority of the units of Heroes, even ones that he has a color disadvantage against. His bulk makes him nigh unstoppable before unleashing single powerful attacks.

If enemies manage to survive him, Sinmara burns 20 non-lethal damage to all enemies within two spaces of himself while Surtr's Menace inflicts -4 to their stats if they are within two spaces of him at the start of his turn. The latter also gives him a +4 buff, giving him a +8 stat advantage. These skills alone are enough to make him dangerous, but is far from his only skills in his set.

Bonfire is a fast charging special that benefits from his high defense. Wary Fighter patches his slow speed by completely negating the enemies ability to double until they force him into a specific damage threshold. He currently exclusively has access to Steady Stance 4, further boosting his Defense during his enemy's turn while slowing their special cooldowns. Surtr is a high tier unit and will take careful planning to face in both Arenas and Aether Raids.

While terrifying up close, Surtr is notably weaker from a distance unless he is packing Distant Counter. If he is not wielding such skills, most Red Mages can tear through is lower magical bulk. If he is, likely only Lilina, Sanaki, and Hoshidan Summer Micaiah can kill him without taking retaliation. The latter is especially powerful given her weapon's Armor bonus damage. If not running Distant Counter, regular Micaiah can also be a decent counter. Fighting Surtr with bulky reds is also a great option, though he needs to be killed quickly or else Sinmara will slowly burn them down as well. Armorslayer and Slaying Hammer wielders also have a chance to take him down with effective damage.

Surtr requires very little inheritance. He is already packing a skill set that allows him to burn the world. He needs only Swap or Pivot so he can move with greater range and approach the enemy quickly. He can also inherit Distant Counter to give him a the ability to combat his ranged counters, but the skill is not 100% necessary. Bold Fighter grants him the ability to double attack and charge his specials during the player turn, which is useful for his sheer might, though he is going to be double attacked since he replaced Wary Fighter with it.

Pirate of Red Sky
King of Múspell, the Kingdom of Flame, attending the pirate festival with intent to consume everything in a reign of fire.

Surtr is illustrated in the trading card game Fire Emblem Cipher with the following cards: 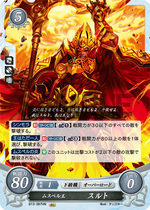 In Norse Mythology, Surtr is a Jötunn (specifically a Fire Giant) best known for wielding a sword comprised of flames. During Ragnarok, Surtr will battle against Freyr and be victorious and will engulf all the nine worlds in flames.