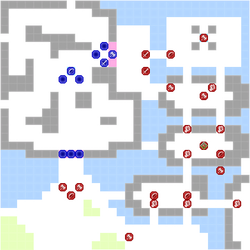 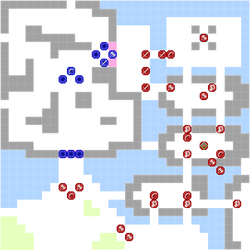 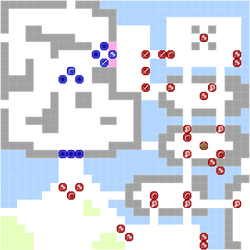 Byleth, Shamir, Alois and 7 others

Chapter script
[view]
“The Alliance has requested aid from the monastery, but the Knights of Seiros are low on personnel. Alois and Shamir decide that the students will have to suffice...”
—Opening Narration

Sword and Shield of Seiros is Alois and Shamir's Paralogue Chapter in Fire Emblem: Three Houses. This chapter takes place at Derdriu, the Aquatic Capital, and is available on all routes during White Clouds after completing Chapter 6.

After the battle, select "It was good training" in the conversation for a relationship boost with Shamir.

Enemies spawn at the beginning of the enemy turn

Northernmost group: Byleth (default), Alois (default), one tank or cavalry unit, one long-range mage (Hapi as a Valkyrie, Lysithea or Lorenz with the Thyrsus staff, Linhardt or Flayn with Caduceus Staff); Central group: Shamir (default), sniper or a Bow Knight-like unit (Leonie as a Paladin works), one mage with long-range healing; Southernmost group: two units that can use bows (Snipers, Assassins) and one unit that has a good AoE gambit

This map can drive you insane if you don’t follow the stated objective: Defeat the enemy commander. This will be one of the few instances where instead of trying to get as much experience as possible by killing all the enemies, save your sanity and just kill the boss. It’s recommended to not attempt this battle until late in Part One to have high enough speed and strength to finish off enemies in one or two hits and high enough defense and HP to take a hit or two.

Start the map by having Byleth use an AoE gambit to immobilize the Assassin and Thief in a straight line. Follow this up by having a Canto unit use a gambit that is four spaces deep (Jeralt’s Mercenaries, Empire Cavalry, etc.) to hit the two thieves and archer in a straight line then move the unit away from the nearest thief. Have Alois finish off one of the thieves and have the long-range mage finish off the the assassin if still alive or the immobilized thief.

Two thieves and an assassin will appear as reinforcements in the central boat during round two. The two Wyvern Riders to the south will fly towards the town and annoyingly, one usually is out of over water far out of reach with normal attacks. An archer with an Accuracy Ring and Deadeye (and a little luck) will take care of the hard to reach one. Any other archer can finish off the second Wyvern Rider. This group should remain in and near the town after this point to take care of any more Wyvern Riders that reach the town (do not approach the fighters in the southernmost boat, they will not move so long as you’re not in their movement range).

Back to the northernmost group, have your Canto unit finish off the thief on the bridge with depleted health and use Alois to kill the archer. Have your mage kill the thief blocking the bridge to the first boat. Move Byleth within the range of the Warrior, Assassin, and Brawler on the boat to move these characters closer. If you are concerned with surviving their attacks, Impregnable Wall can work or a combo of abilities like Faith, White Magic Avoid, Vantage, and Nosferatu with an Evasion Ring also works. The nearby Warrior may use a gambit, if so, have your Restore unit ready on the next turn.

It’s possible to finish the boss off on turn three depending on whether you have a Warp character. If the Warp character is nearby one of the northern characters that has good strength, can attack twice, etc. you may be able to Warp them nearby the boss and finish the boss off. If you don’t have Warp, the character is too far away, etc. use your northernmost group to eliminate more enemies on the first boat to clear a path to the boss. Meanwhile, your southernmost group should be preparing for the approaching Wyvern Riders.

By turn four, your northernmost group should have eliminated enough enemies and be on or close to the first boat to eliminate any remaining enemies blocking your path to the boss. The boss is a pushover and should easily be killed by a strong character.