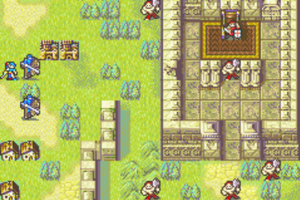 Chapter script
[view]
“A small altar lies on the outskirts of Bulgar. This ancient temple, sacred to the people of Sacae, has long been known for its powerful bond to the world of spirits. Before starting their journey, our travelers come here to pray for their well-being. At this altar, Lyn's hand is directed to a grand inheritance”
—Opening Narration

Sword of Spirits is Chapter 2 of Fire Emblem: The Blazing Blade. Before setting off on their journey, Lyn decides to stop by an altar to pray for her group's well being on their journey. Before she can do this, however, a group of bandits appear and attempt to take the sacred sword, the Mani Katti. A woman sees this and tells Lyn about it. Lyn, knowing how sacred the sword is, decides to stop the ruffians. After defeating Glass, the priest of the altar allows Lyn to touch the sword and pray. The Mani Katti glows when Lyn touches it, and the priest says that the spirits have judged her, and want her to wield the Mani Katti. Lyn draws the sword from its pedestal effortlessly, claiming it as her own.

This chapter teaches the player about visiting nearby houses to gain valuable information. From the three houses, the player will learn about weakened walls, mountainous terrain, and the Mani Katti. Afterwards, the game explains that certain terrain, in addition to bonuses to certain stats, can also restore HP at the beginning of the player turn. Finally, the player will learn about chapters with the Seize objective, obtaining dropped items from enemies, and how to check character stats and items with the R button.