Sword of the Creator

Sword of the Creator

The Sword of the Creator is a Hero's Relic of exceptional power and is said to be a gift to humanity by the Goddess herself. It requires the Crest of Flames in order to wield it. Its only wielder in history was Nemesis until his defeat by the heroine Seiros. Without any known descendants, it is widely believed that the sword no longer has a compatible wielder as he was the sole known individual to bear the Crest of Flames.

In truth, the Sword of the Creator was forged by the bones of Sothis after Nemesis murdered her and pillaged her corpse. With the Crest of Flames implanted into him, Nemesis was able to utilize the full power of the Sword to wage war across Fódlan until he was stopped by Seiros.

Seiros, desperate to revive her mother, removed the Sword of the Creator's Crest Stone, as the Crest Stone once served as Sothis' heart, and implanted it into several vessels over centuries in order to find a compatible host, but none were successful. Theoretically, each of these vessels could have wielded the sword, but it was locked away in the Holy Mausoleum.

The sword was placed in the Holy Mausoleum where Seiros was said to be buried in order to be safeguarded. In the Imperial Year 1180, a group of Western Church defectors as well as the Death Knight attempted to raid the tomb only to be stopped by students from the Officers Academy. The leader of the defectors opened the tomb not to find Seiros's body, but the sword. The leader took hold of the sword in a last-ditch attempt to ward off Byleth, who promptly disarmed them and took hold of the sword. Despite the leader's attempt to block Byleth's attack with a magic barrier, the sword slashed through the barrier and the leader was killed in the process. The sword began glowing, indicating that it had chosen Byleth as its rightful wielder. After the battle, Rhea allows Byleth to use the Sword of the Creator as they are the only person capable of awakening the sword's power, revealing that they had inherited the Crest of Flames.

The death of Jeralt at the hands of Kronya disguised as Monica leads to a confrontation in Sealed Forest. With the assistance of the class they are instructing, they are able to corner her. Solon appears and sacrifices Kronya to activate a ritual, sending Byleth into another dimension. As Byleth and Sothis are left alone in the void, Sothis informs Byleth that it is inescapable and that the only way for them to leave is for the two to merge. Upon fusing, Byleth receives a surge of power and the Sword of the Creator becomes the Sublime Creator Sword. With their newfound power, the sword is able to cleave a portal out of their prison and back into the Sealed Forest where they kill Solon. As a result of their fusion, Sothis no longer appears before Byleth.

A replica of the Sword of the Creator, the Dark Creator Sword, is used by Nemesis at the end of the Verdant Wind route. Unlike the original sword, the replica is powered by Noa and Timotheos crest stones, and it is black in colour. It is ultimately shattered by Byleth during the final battle shortly before slaying Nemesis.

The sword can transform into a whip-like sword by flicking their wrist, causing the blade to segment and it gains exceptional range.

Unlike the other Heroes' Relics, if the user does not have a Crest, the sword does no damage to the user after combat if used.

The Sword of the Creator appears as Byleth's main weapon in Super Smash Bros. Ultimate. It is used for their rapid jab, tilt attacks, and for all upward directional attacks. It retains its ability to be used in its whip form.

In the case of the Sword of the Creator serving as Byleth's up special, it is a tether recovery move that has the unique capability of clinging onto the bottom of stages. If it attaches to an enemy fighter, Byleth will instantly be drawn to them and hits them with a meteor effect if they're at 50% and above by foot-stooling them.

Tentei (天帝, lit. "Heavenly Emperor") originates from the Chinese word Tiāndì, meaning supreme deity. It is commonly used as a title for creator gods or in the modern era as a title for the highest deity in mythology or religion, usually its creator deity.

Concept art of the Sword of the Creator from Fire Emblem: Three Houses. 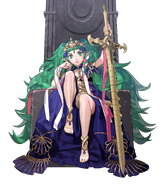 Sothis holding the Sword of the Creator 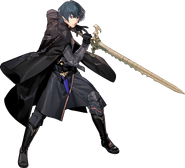 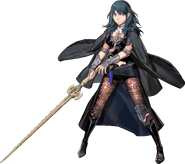 Sword of the Creator's sprite from Fire Emblem Heroes.

Sprite of the Dark Creator Sword from Heroes. 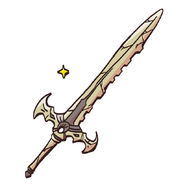