Falcon Knight
[view]
“To beat your enemy, know your allies. Without knowing the skills of your own men, you can never win a war. I don't want to die just because I didn't know what to expect from my troops.”
—Syrene in a support conversation with Moulder

Syrene is a playable character from Fire Emblem: The Sacred Stones. She is the only pre-promoted Falcon Knight as well as the last recruitable character who joins in the main game.

Syrene is a famous pegasus knight of Frelia, and the older sister of Vanessa. She is the commander of their third battalion, and is widely renowned for her beauty, skill, and courage. She acts as an "older sister" figure to Tana, whom she trained along with Vanessa.

Following Grado's fall, remnants of their army continued to fight on despite the war being over. Syrene was leading several villagers to safety when she saw her forces were eliminated by the remnants, upon which she called for calm in her group and went to protect them. At the same time, Eirika and Ephraim were heading to Rausten to get the last Sacred Stone when they came across Syrene and relieved her of the enemies, upon which she joins their group.

In her normal ending, she continues as commander, but can also marry either Gilliam or Kyle through a series of supports. Alternately, she can strengthen her bond with Vanessa.

In Vanessa and Syrene's support conversations, it is revealed that Vanessa looked up to Syrene for her ability to be "both a person and a soldier" while Syrene looked up to Vanessa for her calm and clear-headed manner even when under great pressure. Once, when their father got sick and they had no money, Syrene and her mother panicked while Vanessa gathered nuts, sold them, and bought medicine.

Syrene's supports with Gilliam show a somewhat more hotblooded and teasing side to her. She teases him by telling him she thinks he's very handsome and enjoying how flustered he is at that. In their A support they acknowledge their mutual feelings, with Gilliam proposing to Syrene.

Kyle and Syrene's supports reveal that they met once in their early stages of adolescence, when Kyle was a squire and messenger and Syrene was a trainee. Kyle was sent from Renais to deliver messages to King Hayden. Syrene was amused with his serious behavior; once they were done, she managed to rope him into going to the seaside with her, which Kyle had never seen while growing up in landlocked Renais. Later she helped him fight some bandits, and gave him a small wooden figure in the form of a pegasus, which he kept.

*35% in the Japanese version

As a pre-promote, Syrene has very mediocre base stats, but has very strong growth rates to support them, giving her time to push her skill, speed, and resistance to respectable levels. However, despite her strong HP and strength growth rates, they will still be a touch too low at level 20, which can leave her issues in terms of durability and power. If the Metis's Tome has not been used, Syrene is a perfect candidate for it, as giving it to her at level 1 gives her greater chances of pushing her HP, strength, and defense just a couple points higher to levels more sufficient to maintain her durability and offense.

Statistically, Tana as a Falcon Knight will have higher stats than Syrene everywhere, particularly in HP, strength, and speed, which can give her greater consistency as a unit (Syrene's higher resistance at level 20 is an exception). In addition, due to the World Map function in The Sacred Stones, Tana can raise her Sword proficiency rankings relatively quickly, which challenges Syrene's somewhat respectable Sword proficiency as an advantage over other possible Falcon Knights. However, as a Falcon Knight, Syrene will have an additional point of Constitution over Tana; in particular, it allows her to suffer no Attack Speed penalties from using a Killing Edge, which Syrene can use the moment she is recruited while losing less attack from Lance-based weapons. Compared to Vanessa as a Falcon Knight, Syrene's HP is roughly the same, her strength is only slightly lower than Vanessa's, and has higher resistance and Constitution than Vanessa, but has lower skill, speed, and defense.

When combined with the other two Falcon Knights, Vanessa and Tana, she can perform the Triangle Attack for massive damage. It is hard to make use of however, thanks to its difficulty in setting up all three of the fliers.

“So this is the end. ...Vanessa...”
—Syrene's death quote in The Sacred Stones

“I will show you the honor and valor of the Frelian Pegasus Knights.”
—Syrene's final chapter quote in The Sacred Stones

Graceful Syrene (秀麗の緑翼 Shūrei no Midori Tsubasa)
"Syrene continued as commander of Frelia's Pegasus knights. Her grace and beauty in fight were the subject of many songs and paintings, and her popularity soared."

A Support with Gilliam
"Gilliam and Syrene returned to Frelia, where they were married. All agreed they were a perfect match, and their union was blessed by the crown and the order of knight. The two continued their unwavering service together."

A Support with Kyle
"After the war, Kyle visited Frelia, where he was greeted with a warm reception by Syrene. After the two retired, they were wed. They raised a daughter whose skill in martial arts and etiquette excelled."

A Support with Vanessa
"Sisters Syrene and Vanessa returned to Frelia after the war for a long-overdue talk. They talked of love and war, of friends now gone. Together, they renewed their bond as siblings and vowed never to let that bond fail."

Syrene is illustrated in the trading card game Fire Emblem Cipher with the following cards: 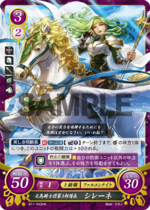 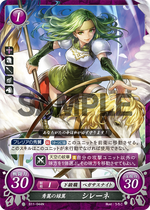 In Greek mythology, 'Cyrene' was a princess of the Lapiths who, when her father's sheep was attacked by a lion, wrestled with the lion and killed it. The god Apollo was so impressed that he fell in love with her and whisked her off to present-day Libya, where the city of Cyrene was founded in her honor. 'Syrene' could also refer to sirens, which in Greek mythology were maidens whose song caused sailors to go mad and jump overboard in an attempt to reach them.

Syrene's portrait in The Sacred Stones. 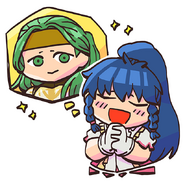