Even Rhythm, Beastbane
[view]
The Taguel (タグエル Tagueru) is a combat shapeshifting class that is introduced in Fire Emblem Awakening. Able to switch between humanoid and beast forms with the aid of concentrated power stored within Beaststones, Taguel attack either by hurling their bodies at their foes or swiping at them with their claws.

The Taguels were once a massive race of beast-people who could transform into various animals in a manner similar to the Beast tribe Laguz of the Tellius Series. According to Panne, a Taguel who is descended from a genealogy of rabbit shape-shifters, certain species of Taguel are able to assume the form of birds and cats. Taguel are also known for their acute senses, namely that of smell and hearing, allowing them to exploit enemy weaknesses and scry into the hearts of the people they interact with.

Long ago, it is said that the First Exalt championed the cause of the then-enslaved Taguel, who were kept as laborers or pets by humans. In return for the freedom he won them, the taguel owe a debt of gratitude toward the First Exalt and his descendants, and subsequently Ylisse as a whole.

In more recent years, the onset of a genocide spearheaded by an unknown group of humans wiped out the Taguel population, leaving Panne as the sole survivor. Panne has troubling memories of the attack itself, as she mentions to Lon'qu, but does not remember the identities of those responsible for it.

Despite her recollection of the genocide, Panne's knowledge of taguel culture is, by her own standards, lacking. This becomes clear in her supports with her son, Yarne, as she does not know Taguel customs that pertain to motherhood or child raising. However, she seems to be familiar with other aspects of Taguel culture, such as religion. The Taguel, she mentions, consider the moon to be akin to the afterlife, where the souls of the departed return upon death. Out of respect, the Taguel do not look upon it directly, and gaze only at its reflection instead. As a whole, the Taguel are known for being exceptional warriors. Additionally, as noted by Emmeryn in Chapter 6, "in Taguel society, everyone is treated as an equal," possibly implying that they lack centralized leadership like Ylisse's exalt.

Panne's mannerisms and behavior reflect an unfamiliarity with human customs. This is both the result of Taguel customs as well as a consequence of solitude, as Panne lived life in seclusion after the death of her warren. For example, in a support conversation with Stahl, she licks food off his face, citing that it is the way Taguel clean each other. Physical distinctions between Taguel and humans seem to be limited to appearance, aside from a possible difference in taste and food preferences, such as the fact that potatoes seem to make Taguel sick.

Taguel are capable of crossbreeding with humans, resulting in children who can shapeshift like their Taguel parent. This becomes a necessity in order to keep the race alive, for if Panne wasn't able to bear children, the race would definitely go extinct. Like hybrid Manaketes, hybrid Taguel will not always inherit every physical feature of their Taguel parent, but they are able to fully assume the form of the animal that said parent is able to transform into.

Taguels are very agile units with decent Strength, allowing them to inflict massive quantities of damage and evade hostile assaults with ease. The Taguels' weapons of choice, the Beaststone and Beaststone+, award them large bonuses that are particularly pronounced in the Skill and Speed departments, giving them an edge against slower enemies and allows the wielder to effectively employ skills that require a high Skill stat.

As Taguel are considered to be beast units, this status that is tagged to them is carried over to other classes that they may choose to reclass into. This means that they are susceptible to Beast Killers and the Beastbane skill. Lancebreaker is the best remedy against this weakness, given that their already high Skill and Speed effectively render them almost impossible to hit, the addition of this skill will further boost their proficiency in dodging attacks.

The two skills that Taguel learn are Even Rhythm and Beastbane. Even Rhythm adds 10 points to their Hit Rate and Avoid, boosting their already superb accuracy and dodging capabilities on even-numbered turns. The usefulness of Beastbane is more tangible, as it awards its users a bonus to their attacks if they are commanded to attack beast-based units. Given the large number of mounted units that take to the battlefield as enemies starting from Chapter 12, Taguel thus become especially valuable assets of the player's army. 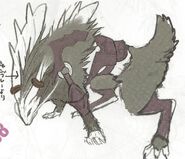 Concept artwork of Panne in her transformed Taguel state. 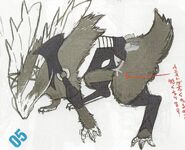 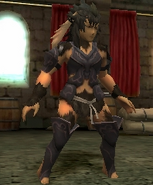 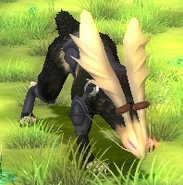 Map sprite of Panne as a Taguel.