Heather Watson
[view]
“Huh? You lost me. You're (yawn...) putting me to sleep. Anyway, we don't got time for that stuff. We gotta get moving!”
—Tailtiu, in a conversation with Claud

Tailtiu is a playable character from Fire Emblem: Genealogy of the Holy War. She is a noble of House Friege, one of the dukedoms of Grannvale. She is the first daughter of Reptor, the younger sister of Bloom, and the older sister of Ethnia. If she is paired up, her children will be Arthur and Tine. She is also the aunt of Amid and Linda, who happen to be her children's substitute characters.

Tailtiu is 16 years old, as revealed in the Mitsuki Oosawa manga.

Tailtiu makes her first appearance in Chapter 3 when she accompanies Claud to the Tower of Braggi after Sigurd's army seizes Madino Castle. She does not reveal very much about her reasons for doing so, apart from claiming to be Claud's bodyguard, to which the latter makes a failed attempt to deny.

After surviving the horrific Battle of Belhalla, Tailtiu and her young children, Arthur and Tine, spend a certain number of years hiding in Silesse. This false sense of security is quickly broken, however, when Bloom shows up there. While Arthur manages to evade capture, Tailtiu and Tine are forcefully separated from him and thereafter imprisoned by House Friege. Tailtiu then withstands years of abuse from her cruel sister-in-law Hilda to protect her daughter, eventually succumbing to depression and death.

At the time of her introduction, Tailtiu appears as a rather bright and bubbly girl with no wish to mingle with complicated politics, especially if they involve her father. She developed a crush on Claud prior to her introduction and claims to be his bodyguard. However, after Reptor turns hostile against Sigurd's army, Tailtiu begins to display her true personality, one which is of a concerned and insecure nature, as she fears that her relationship with Reptor will strain her bonds with her allies.

Tailtiu suffers greatly after the Battle of Belhalla, where she quickly becomes depressed as a result of the stress she endures from surviving and losing contact with her husband and son. This depression of hers ultimately leads to her eventual death. Even at her lowest point, she is still extremely protective towards Tine, willingly standing up for her and taking on the tortures meant for her daughter whenever she could. Even after her death, Tine still looks towards her mother as a source of inspiration, wondering what Tailitu would have done in her place on the battlefield.

Tailtiu joins late in the first generation, and at a low level at that. She begins with highly impressive starting stats for level 3, but her growths are a bit unfortunate. While they are slightly above average overall, they heavily skew towards Skill and Luck. Even with her respectable starting Speed growth, she does not benefit much from them since she does not possess the Pursuit or Adept skill. But on the plus side, her stat skew will allow her to have solid Accuracy and Evasion. Additionally, as a Thunder Mage with Thrud blood, Tailtiu possesses A-rank Thunder magic, allowing her to use the rather impressive Thoron tome.

It can be a bit of a challenge to bring Tailtiu to Promotion since she not only comes to you underleveled, but has low Movement and weak durability. However, Tailtiu can exploit her low durability and turn it into a strength, as her Wrath skill allows her to automatically perform Critical attacks if she is below 50% HP. This allows her to kill most units she faces in combat, but it also comes with a very high risk of her dying if she is attacked during the enemy phase. Tailtiu's promotion nets her the Continue skill as well as the ability to wield staves upon promoting to Mage Fighter, making her less reliant on Wrath for damage output and improving her versatility.

There is one place where Tailtiu tends to do extremely well: the Arena. Due to its mechanics, losing a fight will automatically set Tailtiu's HP to 1, meaning she will then enter combat with Wrath active. At base level with Thoron, Tailtiu's critical attack will hit for 60 damage on enemy Resistance, which will usually kill them in one shot. If Tailtiu misses or the enemy hits her first, she can then simply reenter the Arena and try again. This means that Tailtiu should be able to clear out all active enemies, even at very low levels, lessening the burden of raising her.

Overall, Tailtiu is a weak unit as she not only comes to you late, but it can be quite a bit of work to actually promote her, and even after promotion she is not particularly exceptional, as her low Movement will not be fixed and your other units are capable of doing as much damage as her with less risk. While leveling her up is not terribly useful to Sigurd's army's overall strength, it is generally a decent idea to level her regardless to improve her children's starting stats.

Tailtiu's children, Arthur and Tine, are both Magic oriented units, which makes pairing her up a very simple affair. Tailtiu's husband should generally come with good Magic growth, and either the Pursuit skill or Vantage skill.

Tailtiu is best paired with Lewyn, Lex, or Azelle. The rest should be avoided due to a lack of Pursuit or Vantage, lack of Magic oriented growths, no inheritable weapons, or some combination of all of that. It is worth noting that Arden can make a decent pairing with Tailtiu, but since he is essentially Lex without Paragon, unless Lex is unavaliable it's best to go for him anyway.

In Chapter 4, Tailtiu may speak to Azelle, resulting in her gaining five points of HP and 100 love points with him.

In Chapter 5, after Phinora Castle is captured, if Tailtiu is in love with either Claud, Azelle, or Lex, she may speak to her lover, but nothing will result of it.

Thunder Noble
A noblewoman from Friege and descendant of the crusader Thrud. She appears cheerful but is hiding her troubles. Appears in Fire Emblem: Genealogy of the Holy War.

Tailtiu is a fairly typical Blue Tome Mage of her time in Book I, boasting a solid 32 Atk and 35 Spd, but relatively low physical bulk and her magical bulk being passible for Book I standards. Unfortunately for her, the offensive blue mage style put her in direct competition with several other notable Blue Tome units such as Linde, Ishtar, and Delthea, most of whom simply outclassed her in terms of stats and better unique tomes. Her main saving grace is that she is among the easiest to acquire multiple copies, making her a competent merging project and was an innate Bladetome user, making her perfectly capable in that role. While her later Resplendent form gives her a significant boost, she still remains a fairly serviceable offensive blue mage, but nothing particularly spectacular. She originally wielded a Blárblade tome which gives her attacks additional power if she has visible buffs on her at the start of combat. Given the relative ease of buffing allies who can give her these boosts, Tailtiu can reach solid power output, though the special cooldown increase does make it slightly difficult to activate her specials at an opportune moment. Still she is the far better innate Blárblade user between her and Odin. She later gained Book of Thoron, which, when entering combat under 75% health and triggering her Special, adds 10 additional damage and reducing special by 1, thus making her better offensively and increasing her damage output. She has perhaps one of the most lackluster effect refines in the game as her tome refine simply gives her a Darting Blow 3 effect, giving her a +6 increase to her Spd if she initiates combat. While it does push her Spd to 41 on her turn, the ever increasing Spd of newer units makes this skill both something of a necessity at times, and also a rather lackluster way of bringing her up to par with unit with the same stat naturally. The rest of her kit is rather lackluster but has applications in situations. Rally Speed Resistance was among the earliest dual stat rally skills which was useful for Arena scoring. Atk/Res +2 gave her flat stat increases to both Atk and Res, but is too small of a boost to be meaningful. Drive Speed is an excellent buffing skill and can stack on Hones and other boosts.

Tailtiu's counters are fairly straight forward as she is dealt with very easily by high bulk Green units and any Green unit with mediocre offense or better given her low defenses. Even most blues can easily deal with her and can take a hit or two from her. Book of Thoron's effect requires her to be at a certain damage threshold and activate her special to reap the full benefits, so any unit that can slow her special charging can stifle her main means of apply offensive pressure.

As mentioned above, Tailtiu is a great budget unit and can be run simply on a normal offensive mage set. This includes inheriting Fury and Desperation as they neatly sync with her Tome. Fury gives her a boost in stats and the recoil can put her in range of her Tome's effect and Desperation's requirements as well. Draw Back has better universal applications than her Dual stat rally, albeit at the cost of Arena points. Glimmer or Moonbow work effectively for their fast cooldowns which syncs well with her Blade Tome or Book of Thoron, either empowering her attacks through buffs or partipartiallycaly negating enemy resistance. Her skill C can be filled with either of the Attack Wave skills as she does need the Atk boost to give her better damage overall.

Tailtiu is illustrated in the trading card game Fire Emblem Cipher with the following cards: 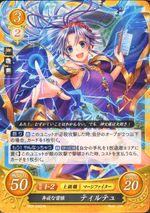 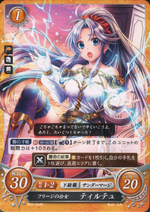 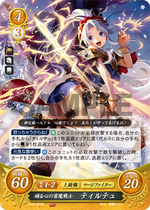 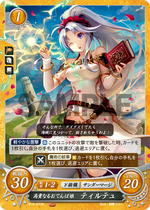 Tailtiu is a goddess from Irish mythology; the confusion stems from ティル ("tiru", with the standard modified "chi" as a "ti") being used to represent the Irish "talʲ". The exact pronunciation is closer to "tell" (as in the modern "Telltown" in County Meath).