Takumi (タクミ) is a main and playable character of the Hoshido route in Fire Emblem Fates. He is the third child of the Hoshido royal family and a skilled archer. He is voiced by Yuki Kaji in the Japanese version.

Takumi is the third child of the Hoshidan royal family. In order to obtain other's recognition of his own strength, he has been perfecting his martial arts. His two retainers are Oboro and Hinata. If he achieves an S-Support with another character, he will have a son named Kisaragi. Takumi has potential of a good swordsman, but when he was miserably crushed by Ryoma during a sparring, he chose to become an archer. He is very intelligent and learns things very quickly. Even Ryoma acknowledges that Takumi's ability to formulate strategies is one of the best in the army.

Upon choosing to side with Hoshido, Takumi and his siblings will join the Avatar's army.

Between Chapter 6 and Chapter 10, Takumi was brainwashed by Iago to do his bidding. When he appears in Shinobi Village, Hinoka and Sakura are relieved to see him again, but the Avatar notices that something is off about him. He shoots an arrow at Hinoka and attempts to attack the Avatar, but Azura steps in and uses her song to banish the presence controlling him. He snaps out of it and willingly joins the army. In Chapter 25 , he's possessed once more, but snaps out of it again, much to Iago's shock.

Upon choosing to side with Nohr, Takumi and the rest of the Hoshido forces attack the Avatar and the Nohr forces.

After the Avatar and the Nohr forces capture Sakura and Yukimura, they continue deeper into Hoshido territory. Takumi and his subordinates Oboro and Hinata, along with a group of Hoshidan soldiers meets them along one of the border walls. The Avatar and the Nohr forces defeat Takumi and his soldiers, but after his defeat a demon possesses him, and he seemingly falls to his death. It is revealed through the third route that Anankos possessed him after Garon had failed to carry out his orders.

After defeating the presence that had taken on the form of King Garon, an infested Takumi appears before the Nohr royals and attacks them mercilessly with his bow. He shoots the Avatar and drives them into an unconscious near-death state.

Takumi reappears in the Avatar's dreams and asks them to kill his possessed body for good. He then gives the Avatar his bow and lends his support alongside his step-mother and brother.

In Chapter 10, Takumi joins the Avatar's army after being rescued by them, being the second sibling to join along with his retainers. He is initially reluctant to believe the Avatar's claims of a true enemy, but a fortune from the dying Izana convinces him to put his trust in the Avatar.

Constantly overshadowed by the talents of his older siblings, Takumi is thus, understandably, in a constant state of moody malcontent, keenly desiring to receive recognition without being framed by the achievements of Ryoma and Hinoka. This fact alone serves as both a strength and a flaw; on one hand, this has spurred Takumi to be immensely diligent in his austere efforts to upgrade his abilities. This fact is evident in his supports with Mozu, where he disproves her doubts over his farming capabilities by tirelessly engaging in manual labour on the field.

On the other hand, however, Takumi is known to be rather weak mentally due to the overwhelming inferiority complex that he harbours, a fact that is easily exploited and corrupted by Iago. The seething words of hatred that Takumi repeatedly utters while under the corruption's influence are very telling of the crippling inferiority that he feels, as they revolve around a desire to be stronger.

Takumi is also known to be a very cautious person, a fact that is proven through his becoming immediately wary around Azura and the Avatar because of their ties to Nohr. Despite this, he is significantly friendlier towards those who have gained his trust. This fact can be observed in his supports with Leo, where he initially treats the latter with cold arrogance, only warming up to him upon learning that they share similar aspirations.

He has the worst dreams out of everyone in the army. His birthday is December 14.

Conquest Chapter 6 - The Descent to Darkness

Takumi is a Japanese given name. Takumi (匠 or 巧み) roughly means artisan or skillful. 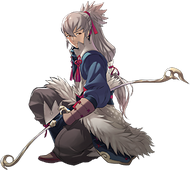 Takumi as seen on the boxart of Birthright.

Takumi as he appears in Fire Emblem 0 (Cipher).

Takumi as he appears in Fire Emblem 0 (Cipher) as a Holy Bowman.

Takumi as he appears in Fire Emblem 0 (Cipher) as a Cavalier. 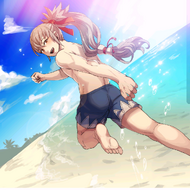 Takumi during a cutscene 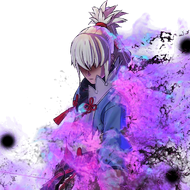 Takumi's battle model as an Archer.