Melissa Fahn
[view]
“I hope our efforts end this war quickly. I don't want to see anyone else die.”
—Tana in a support conversation with Cormag in The Sacred Stones

Tana (Dana in the Italian version) is a playable character in Fire Emblem: The Sacred Stones. She is the princess of Frelia, and the younger sister of Innes. She is a pegasus rider, and old friend of Eirika and Ephraim.

Tana is the younger child of king Hayden of Frelia. She and her brother Innes are childhood friends of Eirika and Ephraim, as both are heirs of the allied kingdom of Renais. Frelia is a country known for it's army of pegasus riders, and Tana notably trained under the pegasus knights Vanessa and Syrene. Her pegasus is named Achaeus, name given by Syrene, who Tana seems to idolize and treats her as sort of a mentor towards her.

Tana is first met in the Border Mulan, a place she had gone to help her friend Eirika who was escaping her kingdom, but she ended captured instead. Later, when she is freed by Eirika's army, Tana hosts Eirika, her twin brother Ephraim and their army in her castle in Frelia, and invites them to a war council with her father and brother, to decide their next steps.

She officially joins the army in order to accompany her comrades and older brother to war. The circumstances in which she gets involved in the war vary, depending on the path taken: in Ephraim's path, she runs away from home and is captured when she was tracking Ephraim's group after they leave Frelia, but in Eirika's path, she directly goes to Eirika and asks to join her troops. Regardless of route, without thinking about her own well-being, she went to help the friends of hers.

Tana appears to harbor a crush on her old friend Ephraim, even though he is oblivious all the time of her feelings. She can also move on from his feelings for him and romance Cormag. In Ephraim's route exclusively, Tana is the one that can recruit Cormag if she talks with him. In Eirika's route his recruitment requirements are different though.

After the war Tana, is said to lead a happy life in Frelia, and kept her close relationship with Eirika. If she is paired with Ephraim, she will marry him and become queen consort of Renais. If Tana is paired with Cormag, she returns to her country and search after him for years, until she finally finds him and consecrates Cormag her knight .

Tana is cheery, sociable, and a little naïve. Her happiness and sociability seem to spread to others, as she is able to become friends with Marisa even though she is noticeably unsociable; this is also seen when she recruits the angry and hurt Cormag by basically sweet-talking him into re-considering his conflicted loyalty to Vigarde as well as his thoughts on Duessel's defection. She also strongly refuses to have people taking care of her, wishing to be seen as more of an adult than a young girl in battle and determined to not let her princess status keep her away from the harsh reality.

Tana is kind and loved by her people. Her personality is the opposite of her brother's, to the point that she envies Ephraim and Eirika's close sibling relationship and wishes her own relationship with the stoic, arrogant Innes was closer. Despite the many fights between Tana and Innes, they actually adore each other.

*Have 8 Strength, 8 Skill, 12 Speed and 7 Defense in the Japanese version

**Eirika's route only, comes with no items in Ephraim's route.

Of the four available flying units in the game, Tana has the highest overall stats, though Vanessa seems to excel more quickly. Promoting her to a Wyvern Knight will give her 3 more points of constitution, which will allow her to wield heavier lances while losing less Attack Speed. She is a much more durable choice than Vanessa as both a Falcon or Wyvern Knight, due to her higher HP and luck, allowing her to take more hits. On the other hand, Vanessa, while having less strength and durability, has higher skill, and slightly higher resistance. Tana's HP and defense early on are negated by her phenomenal speed and luck growths, making her nearly untouchable.

Tana is a good option to support Cormag with because of their equal movement and Cormag's fire affinity, which increases her offenses. She can initiate the Triangle Attack with the other two Pegasus Knights, as long as 2 of the three are Falcon Knights, even if she is a Wyvern Knight.

Noble and Nimble
The princess of Frelia. Innes's sister. She's enjoying her break on a summer beach. Appears in Fire Emblem: The Sacred Stones.

Frelian Starlight
Princess of Frelia, and sister to Innes. Wants only to be friends with the twin prince and princess of the neighboring kingdom, Renais. Appears in Fire Emblem: The Sacred Stones.

“I've long been prepared for this day...Too long...”
—Tana's death quote in The Sacred Stones

“There's nothing to fear. I'll protect everyone!”
—Final Chapter Quote in The Sacred Stones

A Support with Eirika
"Following the war, Tana and Eirika remained the best of friends. They visited one another when time permitted, and as they grew older, their children shared a bond of friendship as close as Eirika and Tana themselves did."

A Support with Ephraim
"Once Renais was stable again, Ephraim and Tana were wed. Innes protested vocally, but when he saw how happy Tana was, he gave the marriage his blessings. Renais and Frelia are now bound by blood as well as friendship."

A Support with Cormag
"Cormag returned to Grado to assist in the reconstruction of his country. Shortly after, he left to wander on his own. Tana spent years looking for him. In time, she found him and knighted him in Frelia's service."

Tana is illustrated in the trading card game Fire Emblem Cipher with the following cards: 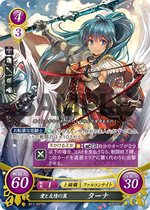 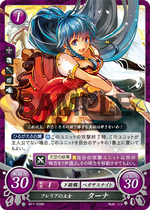 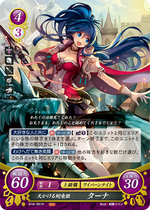 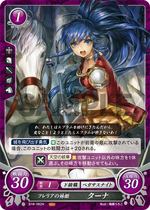 Tana is an unisex name of diverse origins. The feminine version of Tana means "dream" in Chuukese. It also means "chameleon" in Malagasy language.

Her japanese name, Turner, is a common surname from anglo-french origins, an occupational name for a maker of objects of wood, metal, or bones.