Katelyn Gault
[view]
“You should know the weight of being a soldier in the service of the Begnion Holy Guard.”
—Tanith talking to Marcia in a support conversation

Tanith is a playable character from Fire Emblem: Path of Radiance and Fire Emblem: Radiant Dawn. She is the deputy commander of Begnion's Holy Guard, and has placed her full trust in Sanaki.

Although her Pegasus steed does not have a specific name, through her A rank support with Reyson, it is revealed that its gender is female.

Amongst her subordinates, Tanith has a reputation of being a strict and fearful officer, which has earned her the nickname "Great Demon". Alongside Sigrun, she spends her life guarding the Empress. This strictness of Tanith's may be observed in her support conversations with Marcia, where she expresses irate anger towards her defection from the Falcon Knight squad.

It is later revealed that this strictness of Tanith's is nothing more than a means with which she employs in order to express her concern for her comrades, as can be observed in her A rank support conversation with Marcia, where she admits that has faith in her becoming a part of the Empress' Holy Guard.

In her support conversations with Oscar, it is revealed that Tanith's culinary skills are dreadful, with her cooking having successfully "taken three of the academy's finest generals out of action for nearly a month." In their A support, Oscar promises to teach her how to cook.

While Tanith's stats might not be the best when compared to a trained Marcia or Jill, she still holds her own very well. She has an A rank in swords, something Marcia will struggle to get, which can give her a niche advantage at times. She also joins with a Sonic Sword, which she can use to easily dispatch enemy fliers. She excels at this over other units as she herself is a flier, meaning she will often be able to meet them in the air or otherwise match their mobility. Another niche she has is her Reinforce skill, as it allows her to call in two NPC Pegasus Knights and one NPC Falcon Knight (can be done a maximum of twice per chapter). These reinforcements may be used as distractions for enemies in sticky situations, difficult chapters or to safely approach ballistae and Blizzard mages, something Tanith might have more trouble with than your other fliers due to her comparably low HP.

Overall, Tanith is a very solid unit, with a good class, good bases, and several niches that serve to set her apart from even other fliers. Her only disadvantage is her somewhat late join time.

Tanith is one of three playable Falcon Knights in Radiant Dawn, and focuses the most on offense. While her availability is rather poor, she comes at a level relatively close to promoting to a Seraph Knight. As a Seraph Knight, Tanith will be able to activate the Stun skill rather frequently, and will be able to inflict substantial amounts of damage due to her high Strength and Skill growths.

“My life belongs to my master... It is not my place to die here. Forgive me. I believed all too much in my own strength.”
—Tanith's death quote in Path of Radiance

Tanith: General Ike, I will be taking my leave of you for the time being. I must return to Begnion and present a report on the war's outcome.
Ike: Aren't you going to take Begnion's soldiers with you? You lent us quite a few.
Tanith: Though the war may be over, it will take many weeks to see the country secure. I spoke with the princess earlier, and she asked that we help if possible. So I'll leave them in your care a while longer.
Ike: We really do owe Begnion a lot, don't we? In the end, we got not only you, but a whole battalion of reinforcements. General Zelgius and his troops are the reason we were able to minimize casualties during the final battle. He and his men took care of the retreating Daeins and allowed us to focus on the enemies before us.
Tanith: No matter the assistance you had, the victory itself is a result of your strength and leadership. I know two people who will be very pleased to learn of your triumph.
Ike: Please give my thanks to both the apostle and Sephiran. I plan to go and thank them myself someday, but...
Tanith: Understood. Fare well, General Ike. I look forward to seeing you again.
Ike: Fare well.

Tanith was feared by her subordinates in the Holy Guard for her strictness, and guarded Sanaki all her life.

Tanith is illustrated in the trading card game Fire Emblem Cipher with the following cards: 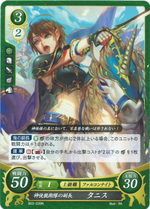 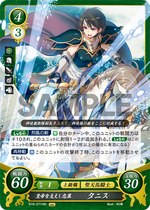 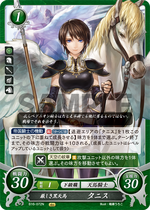 Tanith is the name of the Phoenician goddess of love, fertility, the moon and the stars, and means "serpent lady".

Furthermore, there was once a wealthy and prosperous port city named Tanis in ancient Egypt. It later fell into ruin after the decline of the Egyptian civilization, and was finally abandoned in the 6th century A.D.