Tanya is a playable character from Fire Emblem: Thracia 776. The eighteen-year-old daughter of Dagdar, she is a tomboy who grew up among brigands. She shares a close bond with Orsin.

Tanya first appears in Chapter 1, where she, along with Dagdar and Marty, takes up arms to assist Eyvel in quelling Raydrik's invasion of Fiana.

Tanya, along with the rest of the Fiana Freeblades, is later separated from Leif and Eyvel in Chapter 3, as the prince is captured by Raydrik.

After Leif is reunited with the Fiana Freeblades, he storms Dagdar's mansion in Chapter 8x, where he finds Tanya and Dagdar overwhelmed by the bandits under the treacherous Gomes' command. Tanya is reunited with Orsin in this chapter, where, despite getting angry over his insensitive way of expressing concern for her, cries in his arms.

Tanya then goes on to continue supporting Leif in his cause to liberate Northern Thracia from the Grannvale Empire. She will move to Fiana thereafter, where she gets married and is blessed with many children. Although her husband is not named, it is heavily implied that he is Orsin due to the similarity of their endings.

Having grown up among bandits all her life, Tanya is tomboyish by nature, both in dress and in speech. She is also known to have a short temper, as can be seen when she gets easily incensed when Orsin tactlessly calls her a 'kid' in Chapter 1 and an 'idiot' in Chapter 8x.

Despite Orsin's crudeness, it is clear that Tanya has strong feelings for him. While she gets angry with him for calling her an 'idiot' in Chapter 8x, this stems from her being hurt by his careless disregard of her feelings. She makes this obvious by calling him out for it, telling him that he could stand to be "a little... kinder".

Tanya is the closest thing Thracia 776 has to a standard Archer. While she has good Speed, her low Strength means she has trouble reliably killing enemies. She also lacks close-range weapon options, preventing her from being able to attack on Enemy Phase. This is problematic, considering that combat in Thracia 776 mostly takes place on Enemy Phase.

Despite this, Tanya still has some notable strengths. She has an extremely useful support with both Orsin and Dagdar, two great combat units, though it is not exactly worth deploying her solely for that due to her low durability. She can also inflict chip damage in the earlier chapters to help units like Leif get kills.

If the player wishes to use Tanya as a long-term combat unit, it is recommended to give her Strength-boosting scrolls. Her Bow rank should also be raised to B as soon as possible so that she can use the Brave Bow, which will greatly increase her offensive prowess.

"After moving to Fiana, Tanya married, and was blessed with many children. Owing to her honest and open-hearted nature, she quickly became a busybody, albeit a well-intentioned one. She made it her business to help everyone, and over time, the villagers came to rely on her just as they would a relative."

Tanya is illustrated in the trading card game with the following cards: 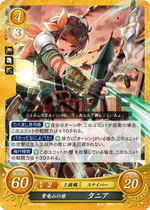 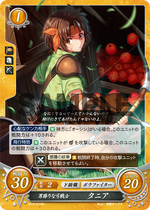 Tanya (Таня), also transliterated as Tania, is a Russian diminutive of Tatiana, the feminine version of the Sabine-Latin name Tatius.

Tanya as she appeared in the Fire Emblem TCG as a Level 10 Bow Fighter.

Artwork of Tanya in Fire Emblem 0 (Cipher) by Horiguchi Kousei.

Artwork of Tanya in Fire Emblem 0 (Cipher) by Horiguchi Kousei.