Arcanist
[view]
“Heh heh... So the Deliverance finally DELIVER themselves to me... [...] Go, Delthea! Put the fear of Duma back into these faithless fools. Smite them with your Aura!”
—Tatarrah

Tatarrah is an enemy boss character in Fire Emblem Gaiden. He is a member of the Duma Faithful who guards the sluice gate on the border of Zofia and Rigel. With Delthea under his hypnotic suggestion and himself being in possession of the Death spell, Tatarrah is a fearsome foe in battle.

Tatarrah first appears through dialogue observing the fatal fate of Desaix during Chapter 3: War of Deliverance. After said chancellor's demise he prepares his arcanists and Delthea for the inevitable battle as Alm's final boss battle of Chapter 3. He and his arcanists (and potentially Delthea depending on the actions of Alm's party) are all routed, preventing the flooding of Zofia once the sluice gate he was guarding was lowered in conjunction with the sluice gate Mikhail had guarded being lowered as well.

Being a minor boss, Tatarrah does not exhibit much personality. What he does display is typical of many villains in Gaiden/Echoes, that of a cruel man who will mercilessly crush those who stand in his way. Uniquely, he is not above making lighthearted banter compared to many other spellcasters within the Duma Faithful.

Concept artwork of Tatarrah from Echoes: Shadows of Valentia. 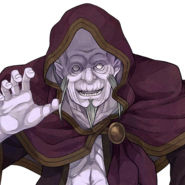 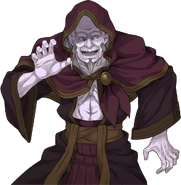