Cristina Vee
[view]
“I always had lots of friends, and the clerics were very kind. That’s what inspired me to become a cleric myself. I want to help people the way they helped me.”
—Tatiana in Fire Emblem Echoes: Shadows of Valentia

Tatiana is a playable character from Fire Emblem Gaiden and in its remake, Fire Emblem Echoes: Shadows of Valentia. Raised an orphan in a Rigelian village, she is a Rigelian saint in the service of Duma's church.

Tatiana is a Rigelian saint who was orphaned at a young age. Raised in an orphanage run by the Church of Rigel, Tatiana joined the clergy in order to repay the church for raising her.

Tatiana discovered the unconscious body of a man washed ashore. Having suffered grievous wounds and lost most of his memories, Tatiana nursed him back to health, and during this time, the two fell in love. The man eventually draws the attention of Emperor Rudolf who admires his combat prowess, quickly ascending the ranks of the Rigelian army and becoming close to the Emperor himself. Rudolf named the man Ezekiel, Zeke for short. However, when the war between Rigel and Zofia starts, Zeke opposes it. To make matters worse, Zeke is stationed with Jerome, a man who leads his personal platoon to constantly raid nearby villages. While Zeke cannot stand his actions, the witch Nuibaba kidnapped Tatiana and holds her hostage in her villa on Fear Mountain and threatens to sacrifice her if Zeke does not comply.

Eventually, Alm's army hears of Nuibaba's abode and heads to Fear Mountain where the witch is ultimately slain. In her villa, Alm finds Tatiana and frees her from her cell. Grateful for their rescue, she asks to join the army so Zeke will stop fighting for Jerome. As the Deliverance nears Rigel Village, they encounter Jerome and Zeke's forces. Upon seeing Tatiana in Alm's forces safe and sound, Zeke immediately turns on Jerome and assists Alm in killing him. After the battle, Zeke thanks Alm for rescuing Tatiana, but initially declines his offer to join Alm's army. However, upon seeing Alm's brand, under orders of Emperor Rudolf himself, Zeke joins Alm's army and Tatiana vows to fight alongside her beloved.

After the war, Tatiana lives a happy life with Zeke. A part of her wished that Zeke would never recover his memories. Unbeknownst to her, he already had, but he kept this knowledge to himself.

Although not technically involved in the story, the news of Hardin's descent into madness causes Zeke to return to Archanea to stop him. Tatiana awaits for Zeke's return in the meantime and, at the end of the War of Heroes, Zeke returns home to Tatiana's side.

She is only indirectly mentioned by Zeke, while under the alias of Sirius, after he manages to snap Nyna from Medeus' mind control. When she immediately recognizes him as Camus, he denies that he is Camus and tells her that he must return to his country and that there is someone waiting for him.

Tatiana is a good-natured, amiable, and selfless person, as shown by her caring for an absolute stranger near death and constant volunteering for duties at her monastery. However, she is also very clumsy and scatter-brained, which on more than one occasion has interfered with various tasks, such as cooking or applying a salve. She fears the possibility of Zeke regaining his memories, believing it might cause him to leave her; in Shadows of Valentia, she tells Alm that she feels horrible and selfish for feeling that way, and adds that if Zeke truly wanted to return to any lover he had before, she would allow him to.

In Chapter 4, talk to her at Nuibaba's Mansion.

Tatiana is a useful Pre-Promoted unit that Alm can recruit near the end of his route. She has average stats other than her Luck and Defense which are terrible, and her Resistance which is, by a wide margin, the highest in the game. While her Defense growth is great, her recruitment comes so late in the game that it hardly has time to improve its starting frailty..

Tatiana's usefulness stems not from her stats, but rather her utility from her spells. From her recruitment, she already has the Physic spell, which Silque lacks, and can thus act as a long range healer and would be the only long range healer in Alm's party. She is the only character in the game able to learn Fortify, which allows her to heal many units at once in its range, hence making her the best healer in the game. Her Invoke spell summons Pegasus Knights, and if you level her up enough, you can obtain the Warp spell.

Overall, Tatiana is the best Cleric in the game by a wide margin over Silque and Genny, despite her late recruitment. Thanks in part to her long range healing, Tatiana can help to keep the army well healed as they press forward during a battle. Even if she will not grow in comparison to many other members of the army, Tatiana's healing grows stronger the more she levels, making her Fortify much more potent.

Tatiana gains a huge boost in all of her growths with only her HP and Defense receiving a drop. This makes Tatiana slightly more capable in battle and can be used offensively unlike her Gaiden version, but still must be used cautiously due to her increased frailty.

Tatiana still shines as the most potent healer of the game as she is still the sole Saint in the game who has Fortify and, unless Faye was promoted into a Cleric, is the only person in Alm's route with Physic. In the end, Tatiana is still a powerful asset to Alm's army and worth the effort of rescuing her even if only using her for her healing capabilities.

(If Zeke is alive)
"She lives on happily with Zeke, all the while praying that his memories shall never return."

(If Zeke is dead)
"When Zeke died, she lost her most beloved person. In overwhelming grief, she cut off her hair."

(If Zeke is alive)
Tatiana prayed that Zeke's memory would remain hazy, and the two eventually did live something of a happy life. Though they were parted at times, Zeke always returned to Tatiana's side in the end.

(If Zeke is dead)
Her true love lost, Tatiana holed up in her priory and devoted herself to prayer. One old friend could not bear to see her alone in such a way, and he made it a point to woo her. Eventually, his efforts overcame her grief, and they were wed.

Tatiana is illustrated in the trading card game Fire Emblem Cipher with the following cards: 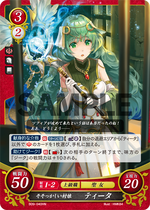 Tatiana is a feminine name of Latin origin that derives from the Sabine-Latin name Tatius. This was the name of a 3rd-century saint, also called Taciana, who was supposedly martyred in Rome by Ulpian during the early reign of emperor Alexander Severus, though this claim is rather shady since Severus was tolerant of Judaism and Christianity. Her veneration and feast (Tatiana Day) are very widely spread through Russia, Ukraine and Belarus, where she's considered a patron of students.