Chapter 21: Without a King (Path of Radiance)

[view]
“ I know... I was a fool. I was blinded by tradition and family reputation. By the time I realized my error, my wife and children had left me. Since then... I've been living alone in my great mansion, surrounded by countless medals and memories... Alone...for years...”
—Tauroneo talking to Rolf in a support conversation

Tauroneo comes from a renowned military family in Daein. He was trained from a young age to be a Knight for the Kingdom of Daein, later becoming a high ranking general of the Daein Army. He sought to continue his family's line of military stars by training his eldest son. He trained his son toughly and when his son finally rode off to battle he lost his arm. Tauroneo let his son leave the military and began to train his second son. Furious, his wife took their children and left Tauroneo.

Tauroneo was once one of Daein's steadfast Four Riders. He shared that title with Gawain, Lanvega, and Bryce. For some reason he was stripped of his title when Ashnard came into power (most likely because he was weaker than the other candidates for the position).

Tauroneo was good friends with Gawain, recognizing his son Ike due to seeing the parallels in the two's swordsmanship.

Despite his major demotion Tauroneo remained completely loyal to his beloved home country of Daein. He was later assigned to serve under Ena as one of those defending the Daein capital Nevassa from Ike and his forces who were attempting to capture it. Tauroneo was one of two deputy commanders assigned to the defense of the capital, the other one being Kasatai who was killed trying to protect the capital. During the battle Tauroneo, along with a few other 'General' units guarded the entrance to the chamber that Ena was in.

Tauroneo could be recruited by Ike talking to him. If a player chose this, Tauroneo would approach Ike asking who had taught him to sword-fight, as he recognized the technique. Ike would tell him his father Greil did. Tauroneo of course recognized Greil (Gawain) as one of the original Four Riders he had served with. Realizing this, Tauroneo asks Ike if he has any siblings. Ike replies that he has a single sister. Upon hearing this Tauroneo says that he refuses to try to kill the last person to use Greil's techniques, and he asks that Ike either take him prisoner or execute him. Ike says he does not have the means to really do either and after a little more talking Tauroneo agrees to join Ike's forces.

After the Mad King's War Tauroneo returns to Daein. When parting ways with Ike he says "I have played my part. All that remains is for me to take my leave of this place. History will judge my actions..."

In Radiant Dawn, Tauroneo can be found defending Prince Pelleas' hideout from Begnion Occupational Army's Troops along side Zihark and Jill. Tauroneo had returned to Daein after Ashnard was defeated to help rebuild it, he then had decided to help guard the apparent heir to the Daein throne so he could see his beloved homeland become free once more. In Radiant Dawn he spends much of Part I guarding Pelleas.

In Part III he serves as a leader of the Daein Army. When the Daein Army is first deployed Tauroneo also questions King Pelleas' motives for joining with Begnion. While Micaiah is departing with the troops to their first battle he promises to try to get Pelleas to stop this war. When the group discovers Pelleas' Blood Pact Tauroneo deploys with Micaiah to stop the Apostle's Army from advancing in Daein. During the battle he meets General Ike once again, the meeting is kept brief and professional. When Pelleas commits suicide to void the Blood Pact his last wish is for Tauroneo to watch over the people of Daein, Tauroneo agrees. If Pelleas does not commit suicide Tauroneo vows to help Pelleas find another way to get out of the Blood Pact without invoking Begnion's wrath. Despite being of Daein, Tauroneo heads to the Tower of Guidance under the care of Elincia.

After all of the fighting is over Tauroneo returns to Daein under the newly crowned Queen Micaiah. He worked tirelessly for his country as linchpin of Daein's military and a pillar of statesmanship for the rest of his days.

Tauroneo is often stuck between a rock and hard place when it comes to loyalty to the country or the individual, and as a result, his feelings are often complicated due to having so many different obligations while being caught between the complexities of politics.

Tauroneo's stats are slightly below average for a level 14 unit, and he's in one of the worst classes in the game. Still, his stats make him usable even on Hard, and he possesses one of the greatest skills in the entire game, Resolve. His resistance is also fairly high for a General in Path of Radiance (Generals having average resistance in Path of Radiance). Finally, his high weapon ranks allow him to make use of some of the best weapons in the game.

All things considered, Tauroneo is a filler unit through and through, but he's a decent filler unit.

It is not recommended to train Tauroneo during Part 1, due to the fact that he disappears halfway through Part I and is overpowered to start with, taking vital experience from your other units. Nonetheless, his absurdly overkill power makes him a fairly impressive tool in the toolbox whenever he is available. Though he should never attempt to solo a map, he can draw fire, take out troublesome threats, and shove or rescue allies with impunity.

During Parts 3 and 4, Tauroneo is more readily trained, though his relatively low Defense will make the Laguz opposition in Part 3 troublesome for him, though the growth is decent and it shouldn't be too much of a problem. He also has high Magic, making him a good candidate for the Imbue scroll. Similar to Path of Radiance, Tauroneo's base stats are mediocre for a unit of his level, he will likely cap Strength, Speed, Skill, and Resistance before promotion, and possibly Defense after promotion. A Seraph Robe will cap his HP before promotion, as its base is exactly 7 away from capping. Overall, Tauroneo is a powerful asset with high stats across the board, and is very useful in the chapters of Part 3 he is required to be brought into battle. Tauroneo's high Resistance, alongside high Skill and Speed and decent HP, Strength, and Defense can make him a highly useful Endgame unit, and potential wielder of the Wishblade, though Gatrie tends to be the better user of wishblade as they possess identical caps, but Gatrie is almost certain to cap HP, Strength, Speed, and Defense, something Tauroneo cannot necessarily guarantee. His Skill and Resistance may be superior to Gatrie's but Gatrie is no slouch in that department either. In the end, one or the other (or even both or neither) could prove useful for the endgame.

“Ah ha ha! I will cut you down with ease and leave your corpse for the rats!”
—Tauroneo's battle quote

Ike: Hyaaaa! Take this! ...What is it? Why are you staring at me like that?
Tauroneo: I am Tauroneo, a general of Daein. Young general of Crimea, I have but one question to ask you. Your swordsmanship is familiar... Who taught you to fight in this way? To the best of my knowledge, that style was used by only one man—an old friend of mine.
Ike: Wait! Are you a friend of my father?
Tauroneo: We were good friends...long ago. How is the old goat?
Ike: ...My father no longer lives. He was defeated and slain by a Daein general.
Tauroneo: That can't be! For the Gawain I knew to be beaten... Who was it? Who took him down?
Ike: A knight encased in black armor.
Tauroneo: The Black Knight, eh? I did not know his strength had grown so much... interesting.
Ike: ...
Tauroneo: Do you have any brothers or sisters?
Ike: I have one sister.
Tauroneo: In that case, I will not fight you. The world must not lose Gawain's style of swordsmanship. I surrender. You may lock me away or execute me or what you will. I care not.
Ike: Are you sane?
Tauroneo: Very much so. I had already decided that I would die in this place. I have served this country for many years—since the time of the previous king. But the current regent... He rules through fear and wants nothing but war. I can abide it no longer.
Ike: If you plan on dying anyway, join us. We have need of strength such as yours.
Tauroneo: You would take a former Daein general? I cannot. You fellow Crimeans would resist. They would never accept it.
Ike: Our army does not have the luxury of being so picky. Please... Lend us your strength.
Tauroneo: ...As you will. I've already thrown my life away. If it can serve you somehow, you may use it as you see fit.

Tauroneo worked tirelessly for his country as linchpin of Daein's military and a pillar of statesmanship.

Tauroneo is illustrated in the trading card game Fire Emblem Cipher with the following cards: 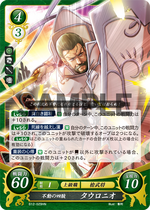 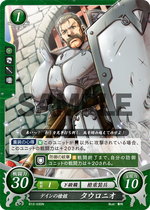 The name Tauroneo is a portmanteau of the Greek words ταῦρος (taûros) meaning 'bull' and νέος (néos) meaning 'young' or 'youthful'.