TearRing Saga: Berwick Saga (ティアリングサーガシリーズ ベルウィックサーガ), full title TearRing Saga Series: Berwick Saga: Lazberia Chronicle Chapter 174, is a game for the PlayStation 2 console. While it is officially the sequel to the original TearRing Saga: Utna Heroes Saga, the games are not related by plot and the Berwick Saga battle and skill systems borrow significantly less from Fire Emblem than the Utna Heroes Saga battle and skill system did, because of this, the two games barely resemble each other in terms of gameplay. 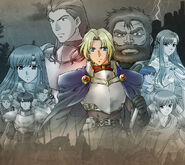