It was released exclusively in Japan on May 24, 2001 for the Sony PlayStation console. Due to the numerous similarities that it shares with the Fire Emblem series, it could be considered to be a spiritual successor, but it was also the subject of a lawsuit regarding Fire Emblem's copyright. In addition, it is often considered to be a spiritual successor of Fire Emblem Gaiden because of its story split between two protagonists, the traversable world map, and the use of various monsters as enemies.

On May 30, there were plans for ports for the Game Boy Color and 64DD but these were soon cancelled.

The game takes place on the continent of Lieberia, which is primarily composed of four large kingdoms: Reeve, Salia, Canaan, and Leda. There are also several other smaller countries such as Marl, Istoria, Arial, and the neighboring island kingdom, Wellt.

One thousand years prior to the story's events, immigrants from the eastern continent of Jugd came to Lieberia and established a new settlement known as the Republic of Reeve. Within a short amount of time, they became involved in a conflict with the native people of Zoa, who reacted with aggression towards outsiders because of their religious teachings. After the Zoans began a war against the settlers, the leader of the republic, Denoas, conquered all of the native clans. Seeking to avenge his fallen clansmen, the Zoan leader Kalbazan entered the temple where Princess Miradona of the extinct Emiyu race slept in the form of a gigantic white dragon. Mistakenly believing her to be the fabled dark god Gerxel who was worshiped by the Zoans, Kalbazan drank her blood and transformed into a dark dragon. Renaming himself "Gerxel", he established the Zoa Empire and proceeded to conquer the entire continent. However, it was eventually toppled by the hero Carluon and Miradona's supposed daughter, Utna, who later became the new rulers of Reeve.

Since that time, Lieberia has been embroiled in an endless conflict between the descendants of the settlers and the Zoans. After Leda and Salia fall into ruin as a result of a disastrous war, the evil sage Gwenchaos becomes the leader of the oppressed Zoans and forms the Theocracy of Gerxel, ruled by a cult known as the Gerxel Church. Once the Gerxel Church begins to terrorize the continent, King Bahanuke of Canaan declares war on it. After many years of fighting, however, he suddenly forms an alliance with it and declares the restoration of the Zoa Empire, to the shock of the world. Bahanuke then begins a conquest of Lieberia. Meanwhile, Gwenchaos and the cultists search for the four shamans carrying Utna's blood, who are required as sacrifices to resurrect Gerxel.

The game follows two protagonists, Runan and Holmes, who are the heirs of Razelia and Granada respectively. The story begins when the two of them arrive at the Kingdom of Wellt, where they begin their separate journeys.

In the first segment of his story, Runan seeks aid from Wellt in hopes of gaining enough manpower to eventually retake Razelia from the Zoa Empire. In the first chapter, he saves Princess Sasha of Wellt from the pursuing army of her family's treacherous chancellor, Duke Codha of Gram. He also agrees to escort her to Verge, a territory under the rule of Count Merlon. During his first meeting with Merlon, Runan agrees to form an alliance with him to overthrow Codha, who took advantage of King Loffaru's disappearance to usurp the throne.

During a battle against bandits in the village of Taurus, Runan encounters a mysterious cleric named Enteh and decides to escort her to the Temple of Mars, where the wise sage Ezenbah resides. Once they arrive at the temple, they find Ezenbah with fatal wounds that he received from Gwenchaos, who had come in search of Enteh. At this time, it is revealed that Enteh is the Shaman of Water and a target of the Gerxel Church.

After numerous battles, Runan liberates the capital of Wellt, and Merlon imprisons Codha to await Loffaru's judgment. Some time later, Runan has a brief reunion with Holmes, and thereafter begins fighting to free Razelia from the Zoa Empire. Following the liberation of Razelia and the fall of Zemseria's treacherous nobility, Runan continues his liberation efforts in Reeve. In the capital, he and his companions win a battle against the army led by Bahanuke's third son, Prince Julius of Canaan. Afterwards, it is revealed that Enteh's true identity is Princess Maeve, the heir to the throne of Reeve, as well as a childhood friend of Runan whom he once promised to protect. This causes a fight between Runan and Enteh, since he is angered by her refusal to reveal herself earlier.

Following the liberation of the capital, Runan marches to the Dukedom of Nolzeria, which has been in ruins since the tragic deaths of Lord Glamdr of Razelia and Prince Arless of Canaan during a peace conference. There, Enteh reveals that she is the Water Dragon, Muse, who caused the tragedy under while mind-controlled by Gwenchaos. Around this time, Runan and Enteh decide to separate, although she follows him in secret out of fear for his safety. At the castle in Nolzeria, Runan has a meeting with Prince Sennet of Canaan, who declares the dissolution of the Zoa Empire. When Runan is attacked by Princess Neyfa of Canaan in the form of the Wind Dragon, Rakis, Enteh transforms into Muse to protect him. Sennet manages to bring Neyfa back to her senses and receives the Ring of Canaan before Gwenchaos returns to capture her again.

Afterwards, Runan and Enteh part ways once again, as she travels to the Temple of Water on a solo mission to rescue Neyfa. However, she is abducted by Father Nefka and handed over to Gwenchaos. Once Runan discovers this, he embarks on a mission to save her, but ultimately fails because she is sacrificed to Gerxel alongside Katri and Enteh. In the final battle, he allies with Holmes, Sennet, and Princess Tia of Leda to slay Gwenchaos after his transformation into Gerxel.

While Runan is fighting a war in Wellt, Holmes travels around the world in search of treasure. After a battle against the Isla Pirates led by Maerhen, Holmes finds a cleric named Katri as a captive on a ship. He immediately recognizes the ring that Katri holds as a memento of her unknown parents, despite not knowing the reason as to why. After an argument between Holmes and Katri, she flees from his crew, and thereafter becomes lost in the poisonous marshes of Isla. While Katri is being chased by an army of monsters that she unknowingly summoned, she suddenly transforms into the Fire Dragon, Neuron. After the monsters are annihilated by Runan's arriving army, Holmes informs Katri that she is one of the shamans who carry Utna's blood. Around this time, it is also revealed that Katri's memento is the Ring of Salia, an heirloom passed down through Salia's royal family.

After a brief reunion with Runan on the island, Holmes continues his adventures in search of treasure, during which he defeats the Taurus Bandits and the Isla Pirates. He eventually travels to the city of Blood, where he meets Lord Lionheart of Selba and agrees to provide assistance to him. As a result, Holmes becomes involved in the war in Salia and aids in the effort to overthrow the current ruler, Ahab, who had usurped the throne from King Dagnell. After defeating the Salian General Zacharia, Holmes discovers Katri's true identity as Princess Maria, the long-lost daughter of Dagnell and his wife, Queen Maria. Following Ahab's death, Zacharia reveals the location of the king and queen, who soon reunite with Katri.

Before departing from Salia, Holmes agrees to part ways with Katri, who has decided to stay with her newfound parents. Afterwards, Holmes begins fighting against the armies of Canaan to liberate Granada. Upon freeing his homeland, he is given the position of the Captain General by his father, Vals. Some time later, Gwenchaos arrives in Salia and forces Katri to surrender to him by holding her mother as a hostage. Once Holmes discovers this, he embarks on a mission to rescue her, but ultimately fails because she is sacrificed to Gerxel alongside Enteh and Neyfa. In the final chapter, Holmes allies with Runan, Sennet, and Neyfa to slay Gwenchaos after his transformation into Gerxel.

After Gerxel's death, the heroes meet with Miradona, who thanks them for their efforts and resurrects Enteh, Katri, Neyfa, and Tia's arranged fiancé, Prince Richard of Marl, before becoming one with the land of Lieberia. Following this, Runan and Holmes part ways with most of their companions and begin a journey around the world with Enteh, Katri, and Shigen.

A beta disk of TearRing Saga exists, called TearRing Saga Prelude. Only the first two chapters of the game's story are playable, and the versus mode has pre-made teams. The VS mode teams are named Reeve Army, the Sea Lion, Arial Army, Leda Alliance, Gram Army, Taurus Bandits, Istoria Army, Gerxel Church, Kingdom of Ava, and Ava Rebel Army. Numerous characters unused in the final game (as well as many generic units) populate the teams:

Apart from possessing similar gameplay as traditional Fire Emblem games such as Fire Emblem: Mystery of the Emblem and Fire Emblem: Thracia 776, there are some more similarities, ranging from vague to obvious.

The release of TearRing Saga was met with legal resistance from Nintendo, who filed a lawsuit against the game's publisher Enterbrain for copyright infringement. The reasoning behind Nintendo's claim stemmed from the numerous similarities that TearRing Saga bears to the Fire Emblem series, among which include near identical gameplay structures and scenario concepts. Prior to release, the game was even at one point titled Emblem Saga.

The courts ruled that TearRing Saga was not in breach of copyright. However, on appeal, Nintendo was awarded a settlement, though the game itself was allowed to continue sales. It is possibly due to this legal battle that the sequel to TearRing Saga, TearRing Saga: Berwick Saga, features a number of sweeping changes that separate its gameplay from traditional elements of Fire Emblem. Shouzou Kaga, who led the development of and was credited for his work on Utna Heroes Saga, went uncredited in Berwick Saga, also possibly to avoid further legal complications.

The game was never officially released or localized outside of Japan. However, the game has been fan translated into English and Vietnamese. 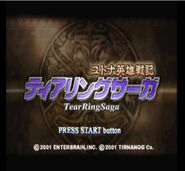 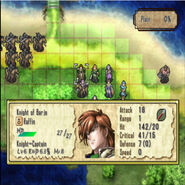