Tears of a Dragon

Tears of a Dragon 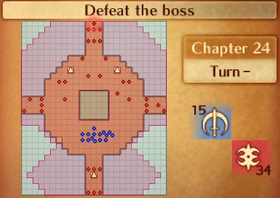 Chapter script
[view]
“The group makes it through the labyrinth and enters the castle, but they are surprised by where they emerge and by the enemy that is waiting for them there.”
—Opening Narration

Tears of a Dragon (星竜の涙 Seiryū no Namida, lit. The Star Dragon's Tears in the Japanese Version) is Chapter 24 of Fire Emblem Fates in the Birthright Version. This chapter takes place in Castle: Training Grounds.

While passing through an underground passage under Elise's guidance, the Hoshidan army accidentally stumbles upon a training ground. Obscured by a statue, the army watch as Hans enters the grounds as Nohrian Heroes and Generals are engaged in their training. Corrin reveals that Hans is the one who killed Gunter in front of them and expresses their desire to avenge his death, but one of the Generals later discovers the Hoshidan army, whereupon Hans gleefully orders his troops to use them as practice targets before noticing Corrin. Hans is surprised to see Corrin and asks how they got here, they refuses to answer him and threatens to kill him, but Hans is not intimidated and orders his soldiers to kill Corrin and the Hoshidans.

As the skirmish continues, Corrin mocks Hans about all his soldiers being poorly trained and what Garon would think of it, to which Hans states that they're all talk and demands that the soldiers sacrifice themselves if they need to for Garon's glory; a Nohrian soldier attempts to question Hans, to which Hans threatens the soldier an opportunity to have his words relayed to Garon who would be sympathetic to the soldier and his family before reiterating his command to have the soldiers quiet down and kill Corrin's group.

Han's soldiers are unable to defeat the Hoshidans, so Hans personally takes over, overwhelming Corrin. Before Hans can land the killing blow, Lilith arrives and takes the blow for them, to which Hans curses out Lilith and vows not to miss again and will have Corrin's head off with his next swing, prompting Corrin into rage and states that Hans will pay for what he's done and that they will kill him with their own two hands, preparing for battle.

During the battle that follows, Hans takes command of his soldiers in an attempt to kill the Hoshidans. Corrin emerges victory and kills Hans in battle. As a result of Hans' death, the Nohrian soldiers who were battling them, decide to surrender. Lilith talks with Corrin one last time before dying, sending them into tears. However, Ryoma tells them that they cannot give up now, as they are getting closer and that she sacrificed herself to help their cause, giving new hope to Corrin. They thank Lilith and bids her farewell before moving into the castle.

The player starts off in the middle of the training grounds, surrounded by hostile enemies. This can be problematic, especially on harder difficulties where the enemy comes with more skills and strength. One thing to note about the training grounds is that there are three fire orbs scattered on the map; two at the top and one all the way at the bottom. Enemy Sorcerers will most likely use these orbs to deal AoE damage on your units, especially if they are clumped together. If your units are strong enough, they should be able to handle the enemy without much difficulty; otherwise, try to stall the enemy units while your strongest units heads for Hans. Note that Hans is a Berserker, with a great deal of HP and comparatively low Resistance: hence, debuff rods, and the Hexing Rod in particular, will be effective.

The Dragon Vein makes an appearance in the four corners of the circular ground. When used it will turn the respective corner of the map into tornado tiles, reducing the movement of flying units caught in them by half. It is highly recommended to use them to delay the incoming wyvern reinforcements that come onto the map.

For those looking toward a strategy of defeating all enemy units prior to tackling the boss, taking over the south-most fire orb position is a good tactic. This section of the map can be used to set up a fortified position to wait out all enemy reinforcements before proceeding toward the boss at the top of the map.