Tempest of Swords and Shields

Tempest of Swords and Shields 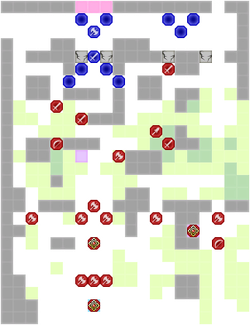 Chapter script
[view]
“Absorbing the Alliance brings the Empire one step closer to a unified Fodlan. The Black Eagle Strike Force returns to Garreg Mach to plan its invasion on the Kingdom, unaware of the enemy lurking in the shadows.”
—Chapter description

Tempest of Swords and Shields is the fifteenth chapter of the Crimson Flower route Fire Emblem: Three Houses. This chapter takes place at the Monastery (West Hall) and contains the mission Protecting Garreg Mach.

With the former Leicester territories under Adrestian control, the Empire is now ready to face Faerghus. Hubert reports that Lord Arundel has headed to Derdriu and is collecting the Alliance's old Heroes' Relics, but Edelgard remains unconcerned. He further explains that the Kingdom will most likely surrender if Houses Blaiddyd, Fraldarius, Galatea, Gautier, and Charon are toppled. While House Rowe in the Fortress City of Arianrhod might be swayed to the Empire, Lord Rodrigue of House Fraldarius has already taken command of Arianrhod. Later that night, Byleth hears Edelgard scream. They find her in her room, and she sheepishly admits that she saw a rat and that she has feared rats ever since she was trapped in a rat-filled prison underneath the Imperial palace as a child. Byleth notices some papers on Edelgard's desk, and Edelgard panics and kicks them out of her room.

At the end of the month, Church soldiers personally commanded by Rhea march on Garreg Mach Monastery to recapture it. Edelgard orders Randolph and Ladislava to engage the enemy's main army while she personally defends the monastery from a detachment led by Seteth and Flayn. The Imperial forces emerge victorious on that front, and Seteth and Flayn are either driven off or killed. Afterward, Catherine reports on the battle to Rhea. If Seteth and Flayn survived, she receives a letter from Seteth explaining that he is deserting to protect Flayn, and resolves to crush the thief who stole her mother with her bare hands; if Seteth and Flayn died, she blames Byleth for taking everything from her and saying that no amount of repentance will grant his/her soul salvation and he/she would be chained to the Valley of Torment and walk the desert until the skins rots from their bones. She then swears revenge on them in the name of the Nabateans. Meanwhile, a mortally wounded Randolph informs Edelgard that the forces that engaged Rhea were defeated and Ladislava is dead before perishing himself. Edelgard laments the amount of blood spilled in the name of her ambitions. Ferdinand reports that several lords of Faerghus have defected to the Empire as a result of the battle, much to his disgust. Edelgard, newly resolved, declares her intention to march through the Tailtean Plains to take Fhirdiad.

If you have Leonie and Lindhardt and have yet to complete The Legend of the Lake paralogue, then you’ll need to defeat both Flayn and Seteth with Byleth in order to keep this paralogue. This strategy will proceed with the plan of Byleth defeating both. During the second turn, Hubert will warn of enemies transporting large quantities of flammable materials and that the enemy may be thinking to use a large fire attack on our heroes. This strategy will also prevent this from occurring. Lastly, it should be noted that none of the items carried by Seteth or Flayn can be stolen.

The battle will begin with a warning from Hubert on the layout of the enemies and the possibility of hidden enemies (we’re going to avoid this as long as possible). Edelgard will then state to form a defensive line and repel all attackers, which is what we will do with our group on the left.

Heed Edelgard’s advice and have your left group focus on defeating all approaching enemies but do so while staying within the nearby fences and avoiding the wooded area in the middle of the map (if you enter this area, a large group of reinforcements will appear). A good tactic to employ for later chapters is to have someone with a long-range attack available (Deadeye, Meteor, Bolting). These abilities can be used on an enemy who will only approach when you move within their range or they’re attacked. Attacked does not mean the ability you use needs to actually hit the enemy, which is where Deadeye can become invaluable as the attack doesn’t usually hit but can aggro enemies towards your larger group and with bows cheap and in large supply you can use this combat art without expending the use of a valuable spell like Meteor.

The right side of the map looks deceptively empty but if one of your character lands on one of the spaces just south of where the road/sidewalk ends, Flayn will appear with a large group of reinforcements that contains Pegasus Knights, Heroes, Assassins, and a Warlock. To not leave one of your characters on an island, either Warp a character that is not impeded by terrain (Byleth as the Enlightened One, Petra as an Assassin, etc.) to this spot or move a character there and then use the Rescue spell to bring them back to safety. If neither one of these tactics is available, you can also use the Impregnable Wall gambit on this unit prior to moving them to this space. This hidden group that appears is automatically aggro, so move all of your units just outside of their attack range and dispatch of them as you see fit (it helps to have one of your Hunter’s Volley archers with this group at this point). Remember to defeat Flayn with Byleth if you still want to play The Legend of the Lake paralogue. Lastly, make sure to not move any of these character to the wooded area in the middle of the map.

Flayn isn’t difficult and will usually go down with one hit from Sublime Heaven. However, if she does not or Miracle activates, use Divine Pulse, take an action with a different unit (move, use a gambit, attack a different enemy, etc.) then try Sublime Heaven again.

Once the hidden enemies on the right and Flayn are all defeated, move your group on the right further south as our focus now is defeating Alois (or if he was recruited, a enemy War Master) stationed at the onager. The group on the left will continue to hold their position and defeat any enemies that approach. Once again, avoid the wooded area in the center of the map.

As you approach Alois/War Master you will take a hit or two from the onager. Make sure your lower defense units are outside of its range as it can kill them on a single hit. Utilize the defensive terrain as you approach to increase your chances of the onager missing. Alois is not difficult to defeat as he has no ranged attack options. Two hits from the Sword of the Creator should be enough.

This part is extremely important. Once the onager is secured, use it to kill Shamir/Boss Sniper just north of Seteth. It will likely take two hits to do this. Once Shamir/Sniper is defeated, Seteth will announce that his ambush plans have been thwarted. All hidden enemies will then appear and the fire attack will not occur (this is extremely satisfying). On the next enemy turn, all remaining enemies, including Seteth, will approach the nearest character to them. Use one of your characters to aggro Seteth near Byleth, then attack him until he can be defeated by Byleth.