Jennifer Losi
[view]
“Then one day I said to myself, "We cannot go on like this!" I watched a dancer on a street corner and memorized all of her moves. I wasn't a very coordinated child and it was so difficult. I didn't have real shoes, so my feet were a mess of blisters, and I fell so many times I was covered in cuts and bruises. It was painful. And miserable. And very, very difficult. But I never cried. Because if I were to cry, he would cry. And I loved seeing Ewan's smiling face. I wanted him to smile all the time, so I worked hard so he could.”
—Tethys revealing her past to Gerik in a support conversation

Tethys is a playable character in Fire Emblem: The Sacred Stones. She is another member of Gerik's Mercenaries, and the older sister of Ewan.

Tethys is a beautiful, charming dancer, and also is a native of Jehanna. She and Ewan were both abandoned by their parents when they were young. After living a sad and hard life on the streets, Tethys began dancing to make money for both of them, and with time, she became famous for her beauty and skill.

In a support conversation with Marisa, it is revealed she is in love with Gerik as well, and jokes about making a competition with Marisa to see who can gain Gerik's love. Other supports reveal that she's very observant and has a sharp eye for detail; she deduces at mere sight that Marisa is right-handed and not left-handed like she says, and she also tells Gerik that she taught herself how to dance after memorising a famous dancer's moves and practicing non-stop. She also has a healthy appreciation of aesthetics and beauty, as she wants Artur to tell her the secret to his beauty.

Tethys is a dancer, which gives her the unique and invaluable ability to give another player unit a second turn. The player can make use of this in a numerous number of ways, from simply allowing another unit to continue fighting, to allowing staff users to warp or heal twice, to allowing a flier to rescue a unit and drop them some distance away on the same turn. She is extremely frail and will likely not receive many level ups to counter this, but she is still one of the most unique and important units once she joins.

By using the enemy control glitch to gain dark magic for Tethys, she can become a combat unit. However, Tethys must not double attack with dark magic if animations are on, otherwise, the game will freeze. Tethy's strength and skill growth are also extremely low; she will almost certainly need stat boosters to max out her strength and skill. Furthermore, dancers do not have high strength caps. Do not expect her to do mind-blowing amounts of damage.

Beloved Dancer
A member of Gerik's Mercenaries who is a talented and charming dancer. Together with her dear brother Ewan, she strives to survive a life torn apart by war. Appears in Fire Emblem: The Sacred Stones.

“The dark rider I foresaw... He was coming for me...”
—Tethys' death quote
“Don't tense up! You'll fight better if you're relaxed.”
—Final Chapter Quote in The Sacred Stones

Tethys, Beloved Dancer (艶美の舞 Tsuya-bi no mai)
"She danced from city to city, and the entire continent became her stage. Her fame grew and grew, and large crowds gathered wherever she performed."

A Support with Gerik
"Gerik and Tethys remained bound to no nation and beholden to no authority. They bought themselves a leisurely retirement. Gerik taught fencing to city youths, and Tethys found many stages on which to dance."

Tethys is illustrated in the trading card game Fire Emblem Cipher with the following cards: 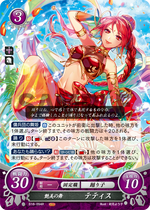 In Greek mythology, Tethys is a titaness and ancient sea goddess. 'Tethys' is also the eighth satellite of Saturn.