God of War
Servant of Alfaðör

Laila Berzins
[view]
“Listen well, mortals. True strength is not revealed by the outcome of a struggle. Consider that we gods have power that far outstrips yours. If a powerful being smites one who cannot hope to resist... What can we learn from this outcome? Nothing. We have power, but not true strength. You two wagered everything on a dim hope. You sacrificed yourselves, railing against fate with all your might. That is true strength. I respect it. I value it.”
—Thórr to Líf and Thrasir in Xenologue 5

Thórr is the overall tertiary antagonist of Fire Emblem Heroes. She is the god of war and servant of Alfaðör. She works alongside Loki, and is annoyed by her creation of the Røkkrs, first seen in the first Røkkr Sieges event.

Thórr arrives after Loki's creation of the Røkkrs from the souls of the dead. Thórr expresses her disdain for Loki making a mockery of those who fallen in battle as they have given their all for their ideals. She then reminds her to tend to her own responsibilities, and informs the trickster that she will be reporting this to their superior, Alfaðör.

Thórr is watching over the doll replicas of heroes, created by Alfaðör. Loki mocks Thórr for having any interest in them, as they aren't real heroes, but Thórr tells Loki not to belittle them as they possess a strength that they do not. She says while they may lack power they are filled with potential and they work together, push themselves with everything they have to grasp victory, and it is a strength they will never know. Loki then becomes intrigued and watches over the replicas as well.

Thórr arrives in the realm of the dead, and greets Líf and Thrasir introducing herself as the god of war. She tells them that regardless of their failure to bring back their ruined realm, true strength is not revealed by the outcome of a struggle. She goes on to say that despite gods having power that outstrips them, a powerful being smites one who can't hope to resist then there is nothing that can be learned from the outcome. Thórr laments that as gods they have power, but not true strength. She respects and values the true strength that Líf and Thrasir exhibited in their struggle with Hel. Thrasir and Líf questions her on what she wants from them to which Thórr responds by asking them to forge a contract with her and Loki. She promises to honor them as warriors who will stand shoulder to shoulder with them in the heavens and if they oblige her master, Alfaðör will grant their wish of bringing back their fallen realm. Thrasir becomes more convinced while Líf remains skeptical but eventually two agrees to the terms, but Líf promises that he will not bind himself to their will for eternity and will eventually break free from his contract. That he will serve as a reminder for the gods to no be so arrogant. Thórr is impressed by this claim, and calls the prince an exemplar and that she has just witnessed the true strength of a warrior's spirit.

The Start of It All[]

While Loki and Veronica send the children versions of Prince Marth, Caeda, Merric and the Whitewings to face the Order of Heroes, Thórr is looking at the fight as she wants to test the Heroes and Marth's team's strength. Thórr also gives immense powers to Marth and his friends so they could face the Heroes more easily, tough she admits they have a strong will, wich is some of strength in itself; She then asks Loki what she was up to and the latter tells her than she wants the best for the kids, just like her. Thórr does not believe her but agrees to let Loki continue, as long as she stays out of her way and then leaves. Marth and his team are latter defeated by the Heroes despite Thórr's power up and are then free from Loki and Veronica's contract. Marth thanks the Heroes and returns to his world with the others.

Anna reports that an army of millions is attempting to invade Askr, which concerns Alfonse and Sharena. Thórr arrives in Askr and declares that in a few days time she will unleash the power of her hammer Mjölnir and her forces will invade Askr and destroy everything in their path unless Alfonse can hold them off. Seeing that Alfonse refuses to back down, Thórr directs his army to a shield that can withstand Mjölnir's wrath. Anna questions her reason for disclosing information such as this to her enemy, to which she responds that they deserve a fair fight and she does not want to slaughter Askr in cold blood, she wants to observe how Alfonse stands in war. She goes on to say that she admires Alfonse's drive to test his limits and while she has no desire to destroy him, she was ordered to take him on. She has Alfonse gather his army at the shield and the two prepare to take each other on to see whether the citadel will fall or Mjölnir.

Thórr does not appear in this paralogue, but she and Loki task off screen Líf and Thrasir to go to the Day of Devotion ( a festival of Askr) . The duo is once again defeated by the Order of Heroes during the festival and retreat.

Thórr captures the children versions of Ephraim, Lyon, Eirika, L'Arachel, Tana and Innes and make them believe that the members of the Order of Heroes are her soldiers, which makes the kids believe that they have to fight them so they could escape. Thórr's trap is in fact a trial she made to see how strong the future heroes are. Despite their defeat, the kids manage to escape and Thórr, satisfied, ends the trial and erase their memories of this event, so the future will remain unchange. However they bond are not broken by the goddess since this is the source of their strength. She then wishes that Ephraim, Eirika and the others might be able to use said strength in the future, either as allies or as enemies.

Thor's army advances over to the Order of Heroes base, as everyone does their best to hold them off and protect the forte, Thórr approaches the Gatekeeper at the gate of the base. She seemed disappointed, quoting that the Order of Heroes could do no better than the gatekeeper and thinking that they are disrespecting her. Although she warned the Gatekeeper to step aside, he stood his ground, leading Thor to attack him. Even after bringing him to his knees, the Gatekeeper stood his ground, surprising her. She then apologizes to him for showing him disrespect, claiming that he is a true hero in strength, she is eventually defeated when Marianne, Marth and Eirika appear to rescue him.

In contrast to her companion Loki, Thórr is more serious and sticks to her duty, while being far more straightforward about it. She looks down on Loki for her disruptive behavior, showing no qualms about reporting her to her superior. She also differs from Loki in that she seems to think rather highly of mortals, as several of her exchanges between them were about their differing opinions on humanity, with Thórr often telling Loki not to belittle them.

Thórr has an appreciation for strong warriors. In particular, mortals who are able to achieve true strength all on their own fascinate her, something she envies compared to the power she possesses. To a point, she allows the Order of Heroes to potentially withstand her attacks by telling her intentions in advance as a way to judge their worth.

Thórr appears as part of the Dragalia Lost event, Fire Emblem: Kindred Ties as the main antagonist. She engages Alfonse and Sharena in battle, where she quickly dispatches Alfonse, and abducts him causing Sharena to chase after them, to no avail. Thórr then tells her that she intends to use Alfonse's power for her plans. She states that if she wishes to follow her, she needs to go to the Dragonblood realm, and disappears with Alfonse.

Thórr decides to test the worth of the heroes of Alberia so she manipulates Peony, Tiki and Chrom into coming to Alberia, she engulfs Peony in black mana to take advantage of her sleeping ability so the others must fight her in the Dreamrealm, teleports Tiki to a part of Alberia where the Dyrenell Empire is slaying dragons as to corrupt her memory, and sends Chrom to a future where Euden takes the Other's power, leaving Zethia to lead the Halidom, thereby dooming the world at Thórr's hands.

After the three have been defeated and recruited to Euden's team, Thórr reveals herself to the group, and reveals that she corrupted Alfonse with black mana, amplifying his powers, causing rifts to open at an increased rate, and claims that their world is almost at an end. She is interrupted by Morsayati who claims that she will not allow Thórr to destroy her world, and that only she will do so, which Thórr accepts and hands Alfonse over to her as the three leave together.

Upon freeing Alfonse, The black mana forces him to fight Sharena, as Thórr prevents Euden from interfering, only for the mana to dissipate from Alfonse thanks to Zethia trying to resist the Other's power. Thórr reprimands Morsayati for underestimating humans, which she rebuffs and leaves, Thórr then begins her judgement of Euden and his world before disappearing.

Thórr leads a colossal army, consisting of fiends, Dyrenell soldiers and Forma, toward the Halidom as she prepares to decimate their entire world, and encourages them to fight on as it will be the only way to save it.

As the battle goes on, the group manages to finish constructing the gate, causing all rifts to close, and Thórr, seeing her army defeated, declares them the winner and spares their world, now with newfound respect for the Dragonblood Realm. While the group attempts to finish their battle with Thórr for good, she declares that it is not the time and that they will meet again, she then retreats back to her world.

In Norse Mythology, Thor is known as the God of Thunder who carries Mjölnir to summon lightning. Thórr is also another word for Thunder (or Donner in German). During Ragnarok, Thor will fight against Jörmungandr and die by the serpent's poison but will succeed in killing the World Serpent. 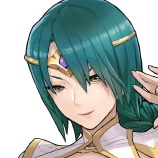 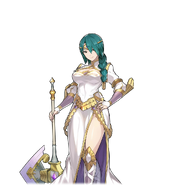 Artwork of Thórr in Dragalia Lost. 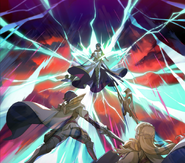 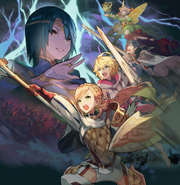