Chris Smith
[view]
“For thousands of years, we have existed underground, living on only that we might someday see our vengeance realized. Here and now, that vengeance is finally within our grasp.”
—Thales

Thales is the main antagonist of Fire Emblem: Three Houses. He is the leader of Solon and Kronya and an important figure within the group known as Those Who Slither in the Dark. In order to carry out his plan, he acts in the shadows of Fódlan.

At some point, Thales assumed the guise of Volkhard von Arundel, head of a minor noble family within the Adrestian Empire. Volkhard was granted the title of lord after his sister, Anselma, became a consort of Emperor Ionius IX and gave birth to Edelgard, though shortly after she would be exiled from Enbarr. During the Insurrection of the Seven in Imperial Year 1171, in which Volkhard played a key role supporting Duke Aegir, Volkhard took his niece, Edelgard, to the Holy Kingdom of Faerghus in apparent exile. Anselma, now going by Patricia, had since married King Lambert, while Volkhard and Edelgard returned to the Empire in 1174.

A year before the events of the game, Thales sends his subordinate Solon to infiltrate Garreg Mach Monastery by posing as the librarian Tomas. Later on, Thales also sent Kronya, posing as the missing student Monica, to assist Solon. Thales, as Volkhard, first appears talking to the Flame Emperor, calling them their greatest creation and key to their salvation. The Flame Emperor responds that there will be no salvation for him, not after what happened in Duscur and Enbarr before leaving.

When Jeralt, Byleth and their class are tasked with investigating a ruined chapel, they find Kronya (still as Monica) in the ruins, who then assassinates Jeralt. This forces Byleth to use Divine Pulse to rewind time and attempt to save their father. Just as they draw the Sword of the Creator to intercept Kronya, Thales teleports in and blocks the attack, leaving Jeralt's assassination an inescapable fate. Kronya is surprised to see Thales save her, though he says it is only because Kronya still has a purpose to fulfill. The two then teleport away from the scene as Byleth mourns the loss of their father.

A week later, Thales and Kronya are seen outside of the monastery walls meeting up with the Flame Emperor. If Byleth is teaching the Blue Lions house, then the professor and Dimitri will overhear this conversation. They learn that Thales and the Flame Emperor are somehow related to the incidents in Duscur and Enbarr, spurring Dimitri's need for revenge. However, before the two can act, the Flame Emperor suspects someone is nearby and they leave the scene.

Near the end of the academic year, the Flame Emperor, now revealed to be Edelgard, ascends the Adrestian Empire throne as its new Emperor and declares war on the Church of Seiros, leading to a massive invasion. In all routes except Crimson Flower, the Knights of Seiros are able to resist the first wave, but a second appears more massive than before, forcing Rhea to transform into her true form. While she decimates the second wave initially, Demonic Beasts pile onto her, spurring Byleth to come to her aid. However, Thales appears and hurls a ball of magic, sending Byleth careening over a ledge into the valley below, not to be found by anyone for over five years.

Thales, remaining under the guise of Volkhard, continues to support Edelgard's efforts to take down the Church of Seiros, though Edelgard and Hubert barely mask their contempt for him. In the paralogue Darkness Beneath The Earth he requests their aid in dealing with some of his "experiments" that have gone out of control. Hubert hypothesizes that this is mostly an attempt for Those Who Slither in the Dark to show off their power and keep Edelgard in line, but Hubert states this only had the opposite effect.

In Chapter 16, Edelgard besieges Arianrhod and kills Cornelia, knowing that she is his subordinate. Thales, still disguised as Volkhard, asks her why she killed her, as she looked like she didn't care for the Kingdom either, but his question is left unanswered. Following this, he tells her that it would be a shame of the Empire would turn into "another" Arianrhod, having deployed the "javelins of light" to level the city, killing most of House Rowe's important members and a third of the Imperial troops stationed there in another attempt to keep her in line, though it had the opposite effect.

During the battle at the Tailtean Plains, Hubert briefly suspects Thales' involvement when a Kingdom soldier transforms into a Demonic Beast, but quickly dismisses the idea, as Dedue states that he was the one who took several Lost Crest Stones from the Kingdom's castle and gave them to his soldiers.

When they go in to the Final Battle, Volkhard tells his niece that their dream of ruling the world will soon come true, however, as Edelgard has no intention of fulfilling her uncle's ambitions and plans to eliminate him and his organization, she calmly retorts that such a future may not come to pass. In the epilogue of the Crimson Flower route, Edelgard begins her silent war against Those Who Slither in the Dark.

After Edelgard assumes the throne, Duke Aegir flees the Empire after having been placed in house arrest. Thales, under the guise of Arundel, secretly takes control of Duke Aegir's lands. He imposes even harsher taxes and work requirements than before, but does it under Duke Aegir's name, ensuring the anger and rioting would be directed towards the Duke.

He maintains his disguise and personally leads the invasion of the Leicester Alliance. He was ultimately defeated when Byleth and the newly restored Kingdom of Fargheus arrives to reinforce the Alliance. He wonders if his plans has been defeated, but continues to encourage Dimitri to kill Edelgard, revealing to the rest of his forces they are family. He rejoices in the "light" with his last breaths before he dies.

During the war, Thales learns that Byleth - and by extension Sothis - has reawakened and is leading the Resistance Army/Alliance Army against the Imperial forces. He attempts to kill their forces at Fort Merceus by dropping javelins of light to destroy the fort, however, this attempt fails, as the Death Knight informs them to flee after the battle.

Following the victory of the Resistance Army/Alliance Army against the Adrestian Empire, they invade Shambhala with the assistance of the contents of the late Hubert's letter. Seeing that vengeance can finally be achieved, Thales states that he will destroy them, even if it means destroying Shambhala in the process. He has his members deploy a group of Titanus and activate the Viskam, though neither method are able to repel the intruders. Despite their efforts, he was eventually defeated. Unwilling to accept defeat, he then activated the javelins of light, aimed at himself, hoping that he would be able to take his enemies down with him. Though most of the missiles were intercepted by Rhea, who transformed into the Immaculate One, a few were able to strike Shambhala. Though they did not kill the intruders, Thales himself was killed from the collapsing rubble.

As the leader of Those Who Slither in the Dark, Thales is calculating and cruel. He allied with the Adrestrian Empire in hopes of manipulating them into a war that would ultimately destroy society as many knew it. He, like the rest of his people, harbors an immense hatred of Sothis and her worshipers. Thales' subordinates were disposable pawns to him. The only reason why he went out of his way to save Kronya was to keep his people's secrets hidden and because Kronya still had some use to them.

While arrogant, and willing to use extremely immoral actions to advance his plans, Thales was also cautious. He knew a drawback of using the javelins of light was that skilled sorcerers would be able to trace the magic to their hideout and that he couldn't use it as he pleased, which meant that he would only use it when he was certain he could wipe out his intended target(s). He also concocted his schemes with consideration in the Crimson Flower route so that he could keep Edelgard in line, who was aware of his true identity.

Thales's hatred of Sothis and the church ultimately made him a martyr who sacrificed himself in hopes of bringing his enemies down with him.

“You’re nothing but animals performing tricks in the hopes of pleasing the goddess. You will never see the sunlight again!”
—Thales' pre-battle quote

“So you have shown yourself, Fell Star. Or, should I say…Sothis? I will spill every drop of blood in your body to fulfill the longstanding goal of the Agarthans!”
—Thales' pre-battle quote against Byleth

“Your eyes, hair, ears, and blood…We remember it all. We remember how you ruined us. How you stole our light and condemned us to eternal darkness! Now, suffer the wrath of the Agarthans!”
—Thales' pre-battle quote

Thales is a Greek name meaning "to bloom". Thales of Miletus was an ancient Greek philosopher, who was known as a pioneer in scientific philosophy breaking away from using mythology to explain the world.

Thales activating a "javelin of light". 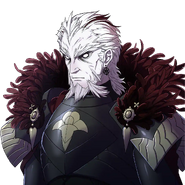 Thales' battle model as an Agastya. 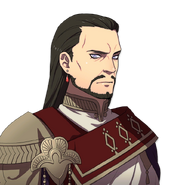