The Axe of Thunder

The Axe of Thunder 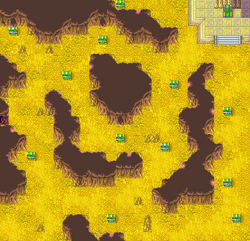 Chapter script
[view]
“Following Elffin's lead, Roy headed for the cave near Jutes to find the Divine Weapon hidden there. Little did they know that they weren't the only ones who knew about the cave...”
—Opening Narration

The Axe of Lightning(天雷の斧 Tenrai no Ono lit. The Axe of Heavenly Thunder) is Chapter 12x of Fire Emblem: The Binding Blade.

You will obtain the Divine Axe, Armads

This is a great chapter to train your weaker units, especially sword-users like Roy, Fir, and Ogier. This is a fog-of-war chapter and there are 11 chests in total, so be sure to bring a Thief or two along if you want all the the items, but if not, then one thief is still recommended. This chapter isn't too difficult, with only the Druid and the boss posing as big problems.

You start out at the southwest corner of the map. You should stay near the entrance, since the thieves will come here to leave since it is the only exit for the map. This way you can steal anything you might want (or everything, if you have the space or Merlinus in your line up) and then kill them. After that, you can unlock the remaining chests at your leisure, being cautious of the poison geysers and remaining enemy units.

The Druid will keep casting Eclipse at your units. This should prove futile since your units should have high enough Luck to avoid this. Try to reach the Druid when his Eclipse is equipped to stay out of the range of his dangerous Nosferatu attack.

When you reach the area around the throne, you should see a Myrmidon with a Killing Edge and a Brigand with a Devil Axe. Both will not attack unless you attack them. The Brigand is easy to kill, but not the Myrmidon. Just tackle the two of them from afar, either with throwing weapons, Bows, or better yet, Magic.

The real problem settles in with the boss, Gelero. A tricky boss, since he is a Berserker, which means a higher chance of getting killed quickly with critical blows, even with his Silver Axe. It is advised to attack him from a distance and rescue the unit, so that he doesn't even switch weapons.