The Bandits of Borgo

The Bandits of Borgo 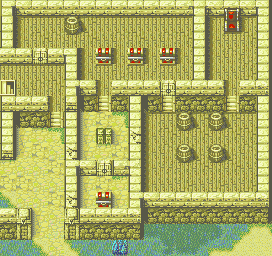 Neimi (automatically from the start)
Colm (talk with Neimi or automatically at the end of the chapter, if alive)

Chapter script
[view]
“Eirika and company pursue the thief who stole her bracelet. Their chase leads them into the mountains, where Bazba's Bandits pillage at will. Eirika cannot ignore her countrymen's pleas for help. She leads her group in search of the bandits’ stronghold.”
—Opening Narration

The Bandits of Borgo is Chapter 3 in Fire Emblem: The Sacred Stones.

You can read the script here.

If you are planning to use Ross, you will want to give as many kills as possible to him now; although he is weak at the moment, he has an incredibly high amount of level-ups available, and two promotions. If he does not get as much EXP as he can in early levels (where he can at least do damage to the enemy), he will be very difficult to train until the Tower of Valni appears. Take advantage of his range capabilities on characters who don't have range themselves (it would probably be wise to give him a Hand Axe along with his Hatchet). Weakening the enemies with another character would also be a good idea.

However, if you do not plan to use Ross, there are many other units you may want to work with. As the best strategy is to upgrade your units to Level 20 before promoting them, it is suggested that you start off with Neimi and Eirika for two reasons. One, if you try to level up them in later levels it becomes way too difficult until the Tower of Valni appears. Two, at higher levels, both have very good avoid. Use Neimi to kill all of the nearby brigands, the one next to the second broken wall, then the one inside the first room with the chest, then the one inside the much larger room, followed by the thief in the corner, and the archer that will attack you after you kill the brigand in the larger room.

Colm is a character you don't want to miss: he can be recruited with Neimi on turn 2. He appears in the area north of the starting area. In the beginning, you will have to feed him kills, but he gets very good quickly. His speed maxes out at level 10 or so, and he can kill with an Iron Sword. Because of the Easy Mode tutorial, Colm and Neimi can immediately Support regardless of difficulty mode; Neimi's fire affinity will boost Colm's Attack, Accuracy, Evasion, and Critical chances. Colm's light affinity will boost Neimi's Attack, Defense, Accuracy, and Critical chances.

Have Colm kill the brigand in the chest room, unlock all three chests, and then, after Neimi has killed all the people she needs to, have Colm pick the door. Set up the encounter with the brigand so that Colm is the only one in his attack range, Moulder is behind him, and Neimi is next to him. After you steal his Pure Water, repeat the process for the mercenary in the throne room to steal his Antitoxin. Have Neimi and Eirika attack Bazba until he dies, and seize the throne.