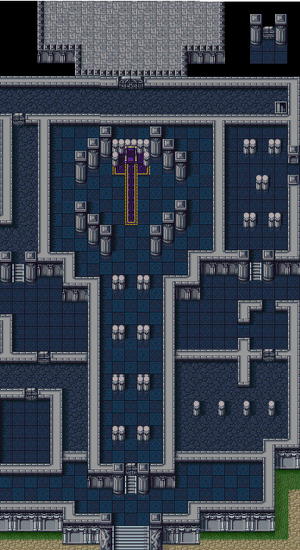 Chapter script
[view]
“Having overcome countless obstacles, Leif finally stood before the gates of Castle Manster. Better known today as "the Twofold Traitor's Lair," the castle towered above the city, intimidating the Liberation Army with its sheer size. Once, Leif had fled these very walls as a mere fugitive, but now he returned as a conqueror. He stood ready to rescue a lost loved one—and in so doing, usher in a new era...”
—Narration

The Baron in Black is Chapter 24 of Fire Emblem: Thracia 776. This is the last time the player sees Raydrik before they defeat him. There is an opportunity to get the Kia Staff. If the player has Sara alive and the Kia Staff in possession, they will go to Chapter 24x.

Ced or Saias do not appear in the preparations screen for this chapter. They will automatically join at the beginning of the chapter instead.

The player's units are divided between three groups, who can never converge, except by use of the Warp, Rewarp or Rescue staves, so use filler units in other chapters wisely to optimally configure this chapter.

The group on the left is tasked with escorting the children to safety. The reason for this is simple. One of the boys (never a girl for some reason) has the ability to unlock the room at the top of the map, which houses the Kia staff, starting turn 5. The door cannot be unlocked any other way, but do be cautious as Dark Mages will keep spawning from the staircases in that room. The left group should have high evasion, as the Dark Mages possess both the Yotsmungand and Hel tomes. When used in conjunction, due to the poisoning effect of the former, and the 1 HP reducing effect of the latter, you are assured to die if hit by both, so avoiding either one is needed for survival.

The middle group is tasked with dealing with Raydrik himself, as well as killing his mercenaries, and recruiting Galzus. Mareeta should always be here, even if it costs a Warp, as Galzus is a unit you do not want to face in combat, and is an amazing unit, for the little amount of time he is around.

The third group is tasked with removing the Dark Mages in the lower room, who possess such items as Sleep, Fenrir, Berserk, Hel and Silence, as well as a Magic Up user who will increase range of the units the status staff users can target. Any unit with Sleep/Silence, Tina with her Thief staff, and any Blizzard users should dispatch of these Dark Mages, so make them unable to use their staves. Also make sure that one of the units affected is the status effects is the Restore using Dark Mage, as he can undo the status effects on any one of the Dark mages.

Raydrik himself is not hard at all. He lacks 2 range, and is extremely weak to the Bragi Sword, which, despite being a personal weapon, quite a few units can use. You can also use Galzus with his Master Axe, or Ced with his Forseti tome to easily dispatch of him. You can also use the developer oversight by "Stealing" a Bow or other two range weapon onto Raydrik, having him unequip the Loptous Sword, and Thief staff it away with Tina, although no one can use it. 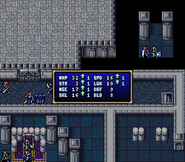 Location of the Secret Shop, north of the characters on the map.
Add a photo to this gallery