View source
watch 15:19
'Fire Emblem: Path of Radiance' - Chapter 1
Do you like this video?
Play Sound 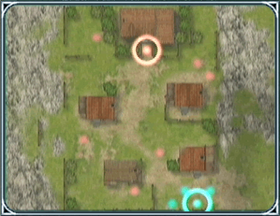 The Battle Begins is Chapter 1 of Fire Emblem: Path of Radiance.

It is the first chapter where Ike, the main character, gets to go out into the field as a member of the Greil Mercenaries. The chapter is rather easy on all difficulty settings and features little that should pose a problem to any player.

The battle takes place in a small town that has been overrun by bandits. The townsfolk have appealed to the Greil Mercenaries for help and Titania leads a tiny force to go and combat the bandits. In this battle, the player can control four characters: Ike, Titania, Oscar and Boyd. Being the first level, all of the characters, with the exception of Titania, are at low levels.

There is very little variety among the enemy units as well, making the level even easier. The majority of the enemies, being Fighters, are axe users. These enemies have no particularly outstanding stats and can easily be dispatched in one or two blows. However, a few of the enemies are of the Bandit class. These units are somewhat stronger, although not substantially. The Bandit units have more HP and are slightly stronger, although they have lower accuracy. Finally, there are a couple Myrmidons among the enemy ranks. These units are weaker in terms of attack than the axe-wielders; however, they have higher accuracy.

This level also introduces the Visit command. There are three houses in this chapter that can be visited, although only two can be reached. The third house is destroyed by the Bandits before any of the player's units can reach it. Only Bandits can destroy these houses, so they should be killed as soon as possible. Visiting the houses that can be reached will yield a Steel Sword and a Seraph Robe.

If the tutorials that are presented before the level are not watched, Ike will begin the chapter with four Iron Swords. The player should trade these to other characters so that Ike will not have to lose any items he obtains during the level. This is a bug found only in the North American version of the game.

The Chapter 1: The Battle Begins level map has very few notable characteristics of terrain. The map has several houses spaced out all over it, being as the battle takes place in the middle of a town.

Otherwise, a few thickets and trees exist on the far spaces of the map; however, these have little to no tactical use, as to reach them, the player would have to get past almost all of the enemy units anyway.

There is very little strategy needed for Chapter 1: The Battle Begins. The battle is rather simple and requires the player only to be careful with his or her characters' Hit Points.

The only thing to really take into account is the Bandits, who will be making their way to the open houses to destroy them. At a decently paced advance a player can easily reach both houses well before the Bandits can or will.

On Hard Mode there will be quite a few more enemies to face, however the strategy doesn't change any. It may be somewhat more difficult to reach the North-Western house but it is still very do-able.

In this battle, the player will gain control of three new units. These units are Oscar, Boyd, and Titania.

Oscar is a Lance Knight. This will somewhat limit his use in this first chapter due to the weapon triangle. However, Oscar has the potential to be one of the best mounted units in the game.

Boyd is the young Axe-wielder who fought Ike in the Prologue. Axe wielders are somewhat rare in Fire Emblem: Path of Radiance, as opposed to previous games. Boyd is also the only possible Warrior you can get in the game, a class he will receive upon promotion. He will have very high attack and high Hit Points, although his defense will be a bit lax. He will be very useful in the game.

Finally, Titania is a pre-promoted Paladin that the player receives in this chapter. Titania is arguably the best unit in the game. Her base stats are leagues beyond everyone else at this point of the game allowing her to easily 1 round ko every enemy in this chapter and her good defensive parameters ensure it is essentially impossible for her to die here too. Paladin is also one of the strongest classes in the game due to high movement and access to canto, allowing her to reach objectives faster and clear maps more efficiently. Her access to the strongest weapon type in the game in axes, coupled with her great weapon rank only makes her better and helps her achieve ko's easier. On top of this her strong growth rates also ensure she remains a great unit all game long. Titania is absolutely recommended for use by all players