Fire Emblem: Archanea Saga
Two years have passed since Archanea fell. Nyna is currently under the protection of the Sable Order of Black Knights, led by Camus. However she is endlessly pursued by Medeus' forces. Camus decides the best option is to head for Aurelis, in hope that Prince Hardin will offer her protection.

Fire Emblem: New Mystery of the Emblem
Archanea's royal palace, also known as the millennial palace, has been occupied by Grust's Sable Knight, Camus, for a period of 2 years. Although Doluna's Emperor Medeus ordered Camus to command the palace, Camus ended up betraying Medeus's orders by keeping Princess Nyna hidden away. Angered by Camus's action, Medeus issues an order to his subordinate.

The Beginning is Episode 4 of Fire Emblem: Archanea Saga. It is later remade as a downloadable episode in Fire Emblem: New Mystery of the Emblem. 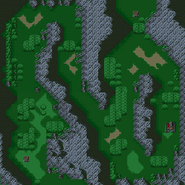