For the weapon of the same name, see Binding Blade 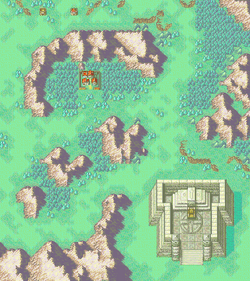 Chapter script
[view]
“After surviving many hardships, Roy finally set foot on Bern's soil. Guinivere guided Roy towards the Shrine of Seals, but in their path stood Bern's elite troops. The strongest army of the continent, led by Lord Murdock, the smartest and strongest general in Bern. Etruria and Bern, the two leading forces on the continent, out for all-out war. The longest and bloodiest yet to be seen by Elibe is about to begin...”
—Opening Narration

After a Bern soldier reports to Murdock that all troops are ready for battle, Murdock reminds Galle that his squad will be the key to defeating the Etrurian Army. After declaring that they will show them the power of Bern's main army, Murdock is thoughtful, saying how he wishes to fight Roy personally, and see the skill of the general that has pushed them back so far.

Bishop Yoder then approaches Roy, exclaiming how he has found him at last. He informs him that Roy's suspicions have been confirmed; the Demon Dragon has been resurrected. After telling Roy of how Hartmut merely sealed the Dark Dragon away with the Binding Blade, Yoder also informs him of the Church's suspect, the Dark Priestess of Bern, who never seems to leave Zephiel's side, and on the power of the Dragonstones the Manaketes carry. He then delivers the Legendary Weapon from the country not visited during the story, (Maltet if Sacae was visited, and Mulagir if Ilia was liberated.) and joins Roy's army to fight.

As the Etrurian Army approached the Shrine of Seals, Galle finally made his move, attacking the Etrurian Army from the rear with his elite squad of Dragon Riders. After telling his apprentice, Zeiss, to crush him with all his might, and saying his final goodbyes to his lover, Melady, Galle is overwhelmed and slain by Roy's forces, declaring that he has no regrets, and asking Zeiss to take care of Melady.

Finally, as Roy and his forces approach the entrance to the Shrine, they are barred by Murdock, commander of Bern's army and last of the three great Dragon Generals. He is eager to match blades with Roy, telling Zeiss and Melady that while he does not wish to fight them, they all know that they must. Murdock is shocked by the strength of Roy's army, and in his last breath, apologizes to Zephiel that he will no longer be able to protect him.

This is one of the hardest levels in the game, perhaps the hardest. At the beginning, you must pick 18 of your units. As you check the map, it appears harmless because there are only a few units posted on the battlefield. However, as the game progresses, 12 units will spawn every turn for 3 turns.

Also, bring a flier unit on the way so that you will be able to visit the secret shop located on the space between the mountains on the rightmost side of the screen, when one of your units reach near the altar.

Galle will spawn in the center of the map with 12 Wyvern Units scattered on the map. Galle is very vulnerable against Aircalibur and some Silver Bow will make short work of him.

Galle and his squad will not attack you after Melady has talked to him (however, Galle will still attack Roy if he is within range.) (On hard mode at least, they will also return to normal aggression if Roy is rescued, for some reason.)

Complete the level within 30 turns to unlock the Gaiden Chapter.

This chapter is notable for having Murdock and Galle, two of the three remaining Dragon Generals of Bern, as prominent enemies.

In this chapter. you basically face the standing army of Bern, so expect lots of reinforcements. In order to stop those reinforcements, kill Murdock.

To access the gaiden chapter, you must complete the chapter within 30 turns and have Melady and Zeiss alive, which makes it even more difficult. When 30 turns are up, Pereth and his subordinates appear from the throne, claiming to have gotten rid of Apocalypse.

You receive the bishop, Yoder, at the start of this chapter, who comes with the Saint's Staff and either the Mulagir or the Maltet, depending on whether you went on the Ilian or Sacaen route (i.e. you receive the weapon that you did not already have).

It is highly recommended to take dragon- and horse-slaying weaponry, as there are many Paladins and Wyvern units, along with a couple of War Dragons.

There is a secret shop in this chapter, so you have a chance to get a few rare items if needed.

From center of NW mountain range, near the village.