Start a Wiki
The Bishop's Teachings 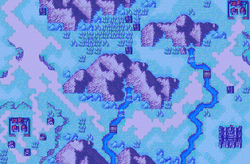 Chapter script
[view]
“After Roy captured Aquleia, other Etrurian powers gradually began to change their views and express their discontent for the Revolutionaries. Driven away from their palace, Roartz and Arcard fled to Sacae, which was still under Bern's control. The vast Sacae plains lay in the center of the continent. Before Bern invaded, Sacae was inhabited by various nomadic clans. The Etrurian army joined the Lycia Alliance Army to form a joint Etruria-Lycia Union Army. The decision was to head for Sacae to get rid of the remaining Revolutionaries, and also attack Bern, who was behind them. Thinking that some Etrurian knights would not approve of being seen as serving under the Lycia Alliance Army, Roy officially named the new Union the "Etrurian Army" and became its commander. Roy led the division responsible for entering Sacae. The Sacaean people were wary of outsiders in the first place, but even worse, Brunya, another of the Three Dragon Lords, had gotten the largest clan in Sacae, the Djute, under submission. The warriors of the Djute clan and Brunya's elite troops stood in front of Roy as he set foot on Sacaean soil.”
—Opening Narration

The Bishop's Teachings (司祭の教え Shisai no oshie) is Chapter 17B of Fire Emblem: The Binding Blade if you take the Sacae route (which happens if by the end of Chapter 16, the experience points gained by Sue and Sin were more than or equal to that of Shanna and Thea).