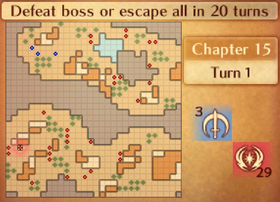 All Allies Escape in 20 Turns or Defeat Boss

The Black Pillar (鈍く崩れ落ちて Nibuku kuzure ochite lit. Collapsing Hollowly in the Japanese version) is Chapter 15 of Fire Emblem Fates in the Conquest Version. This chapter takes place in the Abandoned Town.

Wracked with guilt over the massacre at Cheve and the hunt for the Cyrkensian performers, Corrin has trouble sleeping. As they wander the forest mulling over their thoughts, they see Azura and decides to follow her, figuring that talking to her will help clear their thoughts. They hear a mysterious song in the air that happens to sound like the one the mysterious singer had used to cause great discomfort in King Garon. Eventually they find Azura at a lake where she suddenly vanishes. Corrin quickly follows her, eventually falling through a portal that takes Corrin to an unknown world. Although Azura wonders why they followed her, they are not given much time to think as an invisible soldier attacks them. Thankfully, they are rescued by Gunter who has miraculously survived his fall into the Bottomless Canyon.

Shortly afterwards, Azura reveals to Corrin that in order to obtain peace to the world, they must kill Garon, which Corrin questions this motive, Azura reveals the truth with a one-time-use crystal ball that the real Garon had died long ago, and that the current Garon is being possessed by "a demon" to spark the war between Nohr and Hoshido. Corrin agrees that Garon needs to be stopped and asks how they can show the truth to their siblings, Azura states that the only way for Corrin to prove this truth to their siblings is for "Garon" to sit on the magical throne of Hoshido's Castle Shirasagi, for whomever sits on the Hoshidan throne regains their true form and mind. This means Garon and his army will have to conquer Hoshido, win in Garon's name, in order to trick him into sitting on the throne, which will reveal his degenerated slime form, and then killing him to end the war.

Gunter finally arrives on the scene, to which Azura states she's glad he made it back safely; Azura states that they should go and rejoin the rest of the army, stating that Garon will grow suspicious if they're gone too long.

A script for the chapter can be found here.

Corrin and Azura are forced into this chapter, in addition to Gunter who appears at the start of the level and for plot reasons, you cannot use any other units. Fortunately, you are able to swap items between your units, so before starting the battle, if your other units have useful items, trade it to Corrin or Azura before starting. Your Avatar should be at a reasonably high level to combat the enemies; while Azura does not need to be as high as Corrin, she should also have some training before attempting this chapter, as this is the only map in the game that she must be used. If neither of them are well trained, you might have trouble completing this chapter and should get to the escape zone quickly or train them with the Boo Camp DLC.

Gunter returns in this chapter, with slightly improved stats. He should not have all the kills though as his growth rates are poor and the experience is better off given to Corrin or Azura. While he will slack behind because of this, his personal Forceful Partner is very useful for Corrin.

Although there are a sheer amount of enemies, half of them are placed in the bottom isle which is cut off from the top. The top isle mainly has Ninjas, Villagers and Fighters, while the bottom one has just Ninjas, Fighters, Lancers and a Hero. The Villagers carry random weapons, so players should check their weapons as a few carry Bolt Naginatas rather then the typical Steel Naginata. The Hero serves as the boss of this chapter and is equipped with a Steel Kukri and Star Axe (thrown steel sword/axe); on Lunatic mode, they are upgraded into their silver variants.

There is a Dragon Vein at the starting position which will cause the effects of Replicate for your units, placing the copies at the southern isle. This allow you to clean up the southern isle for more experience, and also various stat-boosting items. Have Gunter support Corrin to provide them a movement and defense bonus. While not needed, having Shurikenbreaker, Axebreaker and Lancebreaker on Corrin will help clear the southern isle quicker. Clear out as much enemies as possible before finishing the chapter. It should be noted that the replicated version of Azura can't sing to refresh their units for balancing reasons.