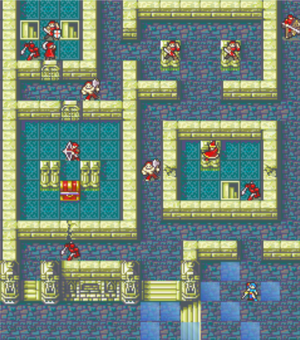 Chapter script
[view]
“A mysterious group seems hell-bent on capturing Nils and Ninian... Having failed, this group, the Black Fang, flees. Rumor has them traveling southwest. Lyn and her colleagues follow in hopes of recovering a lost heirloom. The Black Fang have made a stronghold of an abandoned castle in Khathelet. Its dark halls are alive with shadowy figures...”
—Opening Narration

The Black Shadow is Chapter 7x of Fire Emblem: The Blazing Blade. In order to unlock this chapter, you need to finish the previous chapter, Chapter 7: Siblings Abroad in 15 turns or less.

Ursula, a Valkyrie member of the Four Fangs, asks Beyard what he plans to do about Nils and Ninian's escape. Beyard says that they had managed to steal Ninian's ring, and apparently the group is on their way to the fortress to reclaim it. Ursula says that this is Beyard's last chance, and if he fails here, she will deliver the fang's punishment. Soon afterward, Lyn and co. arrive and prepare to attack. Sain states that there are more enemies than expected, and Kent suggests that they would do well to draw the enemies into the narrow corridors, to force them to fight in smaller numbers at one time.

Once the enemies have been routed, Lyn corners Beyard and tells him that if he vows to never chase after Nils and Ninian again, she'll spare his life. Fearing the Fang's punishment, Beyard uses poison to take his own life, much to Lyn's surprise. Kent states that the enemy isn't any regular brigand, but must have been part of some well-trained group. Lyn returns the ring to Ninian and assures her and Nils that as long as they're with her, they'll be safe.