For  the game of the same Japanese name, see here. 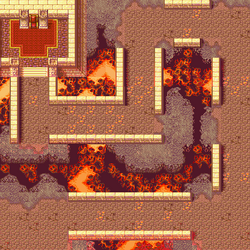 Chapter script
[view]
“Roy vowed to protect Lilina forever. However, with Bern coming full force at them, the Lycia Alliance Army wouldn't stand a chance. Therefore, Roy decided to obtain the Divine Weapons before Bern got their hands on them. Lilina showed him to a cave on the outskirts of Ostia, where the first Divine Weapon was hidden. Located at the foot of a volcano, traversing through the cave was going to be no easy feat.”
—Opening Narration

The Blazing Blade (烈火の剣 The Blazing Blade lit. The Sword of Raging Fire) is a Chapter 8x in Fire Emblem: The Binding Blade. It is the first Gaiden chapter in the game; however, unlike other gaiden chapters, it is automatic, and the only requirement to unlock it is that Lilina must be alive.

The chapter begins with Roy and Lilina deciding to go to a hidden cave in Ostia to find one of the Sacred weapons, the Durandal—A sacred sword once wielded by one of the eight Heroes, Roland, who fought in the Scouring.

Upon reaching the secret cave, Roy and company discover that it has been overrun by Bandits, who are using it as a hideout. The Bandits then begin to converge on the group and a battle ensues.

The battle of Chapter 8x: The Blazing Blade takes place inside a volcanic cave in Ostia. The map includes large pools of magma that are impossible to cross for all units except flying ones (the only one by this point in the game being Shanna). These pools of lava (labeled as a 'Valley' in game) make only parts of the map passable along long pathways.

This particular battle map also includes Lava Tiles, which are spaces that will spurt magma and fire at a person standing on them. These spaces are noticeably different from the others, however, and can thus be avoided.

A unit has to end their turn on a magma space to possibly be hit at the end of the turn; there is no danger to units passing over such spaces. Even if a character ends a turn on one of these tiles, only a few actually shoot fire. If a character, player-controlled or enemy, is hit by the magma, it does 10 Hit Points worth of damage, regardless of any stats.

The other path leads northward, and is the only actual one the player can take to reach the Boss. It will head north until it reaches the north-east corner of the map, a handful of enemies and lava tiles along the way. After that, it turns west, where more enemies are. The path goes west until it reaches the wall of the Throne Room which the Boss is in, and it then goes south a ways along the side of the wall.

After going south a bit, it turns back westward; here is where the most lava titles on the map are along with more enemies. After passing these obstacles, the path continues a short ways further to the west until it reaches the west most edge of the map; from here, the player's units can turn north and can enter the Throne Room.

The Throne Room exists on the north-west corner of the map and contains the Throne which the Boss stands on. It is a walled-off room containing the Boss as well as a small amount of other enemies. Once the Boss is defeated, Roy can capture the Throne and clear the Chapter's battle.

The characters such as Lilina, Ogier, and Wendy can be trained here easily due to the fairly low levels of the enemies in the beginning of the chapter.

The boss of this chapter is widely considered one of the hardest in the game. You should bring Rutger to this map on hard mode, if only for the sole reason of killing the boss. Marcus has some trouble on hard mode and sometimes normal mode, so he is not recommended by himself.

Alan or Lance with a killing edge may be durable enough if they are leveled sufficiently.

If you choose to level up Lilina here, her magic stat will most likely be so high at the end that she can chip away at the boss's HP with a fire tome (which has 95 hit).

Lugh may have trouble doing the same thing, as his magic power may not be enough to overcome the boss's healing from the throne.